The Russian "Shkval" Torpedo Zeroes in on Targets at 200 Knots 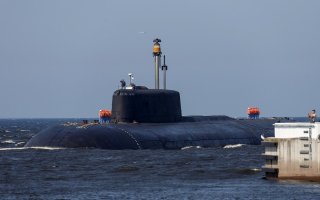 Here's What You Need To Know: Traditionally, torpedoes use propellers or pumpjets for propulsion. Shkval, on the other hand, uses a rocket engine. That alone is enough to make it fast, but traveling through water creates major drag problems.

During the Cold War, the Soviet Union placed a heavy reliance on its submarine fleet to negate America’s advantage in naval forces. The U.S. Navy was not only tasked to help protect the flow of reinforcements into Europe in the event of World War III, it also threatened the Soviet Union directly and would have hunted down and sunk her ballistic missile submarines. The USSR at first used sheer numbers of diesel-electric submarines, then more advanced nuclear attack submarines, to whittle down the odds.

Shkval solves this problem by diverting hot rocket exhaust out of its nose, which turns the water in front of it into steam. As the torpedo moves forward, it continues vaporizing the water in front of it, creating a thin bubble of gas. Traveling through gas the torpedo encounters much less drag, allowing it to move at speeds of up to 200 knots. This process is known as supercavitation.

Shkval was originally designed in the 1960s as a means of quickly attacking NATO nuclear missile submarines, delivering a nuclear warhead at previously unheard-of speeds. The torpedo is of standard 533-millimeter torpedo diameter and carries a 460-pound warhead. It has a maximum range of 7,500 yards. Shkval began mass production in 1978 and entered service with the Soviet Navy that year.

Like any weapon, there are drawbacks. For one, the gas bubble and the rocket engine are very noisy. Any submarine that launches a supercavitating torpedo will instantly give away its approximate position. That having been said, such a fast-moving weapon could conceivably destroy the enemy before it has time to act on the information, as the enemy suddenly has both an enemy submarine and a 200-knot torpedo to contend with.

A noisy—but effective—weapon, Shkval smashes the paradigm of undersea warfare. A 200-knot torpedo is a very attractive capability, and as naval competition heats up in both the Atlantic and Pacific Oceans, we may see even more navies adopting supercavitating designs and adjusting their undersea tactics accordingly. Undersea warfare is about to get a whole lot louder—and deadlier.