Russian Sniper Rifles Could Soon Have a Revolutionary Feature 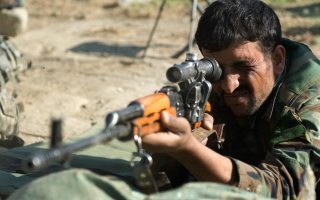 Here's What You Need to Know: The ability to change calibers has been an important consideration for the Russian military.

Few who know firearms would argue that the SVD “Dragnov” is anything but a legendary weapon. When it was paired with the PSO-1 scope and entered service in 1963 it was the most advanced “sniper system” in the world. It was used in countless conflicts and its simplicity ensured that it was able to stick around far longer than competing marksman platforms.

However, all good things must come to an end.

According to a report from Tass, the Russian military has begun state trials for a new semi-automatic sniper rifle to replace the SVDM version of the Dragov, but it would still chambered in the same round.

Tass didn’t specify which rifle was being tested, however, but last year the Kalashnikov Concern announced that it would begin serial production of the Snaiperskaya Vintovka Chuvakin (SVCh) sniper rifle in 2020. It was also announced that Kalashnikov Concern would be finalizing it as an official replacement for the SVD nearly sixty years after it first entered service. Whether Russia is now hedging its bets with an alternative to the SVCH isn't clear.

The ability to change calibers has been an important consideration for the Russian military. The SVCh was developed as a modular rifle system that supported multiple calibers. Variants of the semi-auto sniper rifle include the standard 7.62x54R version, as well as 7.62x51mm NATO version for export or by use by internal forces, and even a .338 Lapua Magnum version.

It is not the only sniper platform under development that can support different calibers.

“The DVL-10M3 rifle’s weight has been reduced to 4.5 kg while it features a barrel length of 500mm,” a senior expert at Lobaev Arms explained at the time. “The gun’s effective firing range is up to 1 km.”

It is the latest variant of Labaev Arm's DVL-10 series of bolt-action sniper rifles. The original DVL-10M1 “Saboteur,” which was introduced in 2014, featured an integrally suppressed barrel that was designed for proprietary subsonic cartridges; while the DVL-10M2 “Urbana,” introduced two years later, was developed as an unsuppressed variant. However, the Urbana model could be still converted to the DVL-10M1 with a barrel change.

The Russian military has made the development of new firearms, including rifles but also grenade launchers and other small arms a priority.

“Along with future weapons, we pay significant attention to the development of new gear, new firearms, grenade launchers and ordnance,” Salyukov added this week.