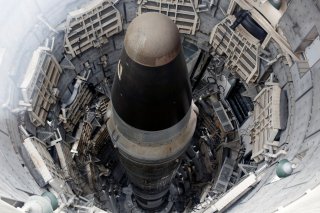 Near the end of the Cold War, the Soviet Union began experimenting with the idea of fielding a laser-equipped tank that could blind the targeting systems of inbound ballistic missiles or vehicles. Ultimately, two prototypes of the laser-armed 1К17 Сжатие, translated to “Compression,” were built, though they weren’t complete until the Soviet Union fell and was replaced by the new government of the Russian Federation.

Today, the United States is among a number of nations working to develop and field advanced directed energy weapons, or lasers, for a number of military applications. The U.S. Air Force recently announced its intentions to begin fielding lasers on their fighter platforms as soon as 2025, and the U.S. Navy began testing its latest laser, the MK 2 MOD 0, aboard the USS Portland in May of this year. But decades before these programs came to light, the Soviet Union was already exploring the idea of using lasers as a means of missile defense.

The Soviet strategy wasn’t to use these lasers to destroy incoming missiles like the applications in development today intend to. Instead, the Soviet laser tank aimed to blind or burn out the electro-optical sensors missiles used to find their targets. Once blinded or damaged, a missile would miss its intended target, whether that was the 1K17 or other nearby assets. Other planned applications included using the laser apparatus to blind heavy vehicles like tanks, making it impossible for them to aim and fire accurately.

How did it work?

The 1К17 Compression was actually designed using a number of modified but off-the-shelf parts, making it cheaper to build and easier to maintain than a completely new platform might be. The chassis was specially designed for its laser application, but was really just a modified version of the existing Soviet Msta-S self-propelled howitzer undercarriage. Atop the artillery chassis, Soviet engineers fitted an assembly that housed a dozen individual lasers (in two rows of six), along with the necessary laser range-finder, and day and night aiming lenses. Each of the lasers in the assembly came with its own electrical aiming drives, allowing the system to aim all of the lasers at objects of varying distances.

The lasers themselves were solid-state platforms based on aluminum oxide Al2O3. Together, the 12 lasers beamed through amplification lenses that effectively converted the 12 individual beams into a singular, high powered beam. Large batteries were also housed inside the vehicle, offering the ability (according to Russian media reports) to engage multiple targets in rapid succession.

“[The] laser guns were capable of burning out all enemy optics within direct line of sight in fractions of a second,” Russia’s state-owned Rossiyskaya Gazeta reported.

“When there was contact with enemy armored vehicles, Soviet laser tanks simply would blind them, making aimed fire impossible.”

However, it’s important to keep in mind that the Russian government that inherited the laser tank program also inherited the Soviet knack for lying about their military technology and capabilities.

So… did it actually work?

Much about the Soviet laser tank’s capabilities remain classified to this day, despite the program’s cancellation decades ago. However, claims from officials who worked on the program seem to suggest it was a highly effective platform (or at least, had a concerted PR campaign aimed at making it seem that way). The laser systems were said to have an effective range that was at least twice that of a conventional tank, meaning it could blind an enemy tank’s targeting apparatus long before the tank was within firing range.

Some within the Russian military even suggested the 1К17 would be effective against low-flying helicopters. The assertion was that it could be paired with radar to identify potential targets, and then use a series of blinking lenses to find the optics the helicopter (or any other vehicle) might use to acquire a target. The laser tank would then fire a directed beam straight at the optical systems, destroying them (as the Soviets claimed) or at the very least, blinding them temporarily. This same concept has been leveraged by China in recent years — using high powered, ground-based lasers to “shine” American spy satellites, effectively blinding them until the beam loses line of sight.

In order to defend the laser apparatus, the vehicle was also equipped with an anti-aircraft gun and a 12.7mm NSV machine gun.

Today, there is little to no evidence to suggest that the laser tank was as effective as the Soviets or the Russians claimed. It is possible that the high degree of secrecy associated with the program may have allowed it to wither and die in the tumultuous years following the collapse of the U.S.S.R., but it stands to some reason that, had the 1К17 been as capable as claimed, it would have seen a resurgence in funding under the Russian banner at some point. There have, of course, been rumors of this program’s resurgence — first in 2015 and again earlier this year. Thus far, however, rumors are all we have.

The first two working prototypes of the 1К17 rolled off the assembly line in 1992, following closely behind the collapse of the Soviet Union that had initiated the effort. According to Russian media, the program was extremely promising, with some accounts even suggesting that it was “practically ready” to enter mass production.

There were, however, some problems that limited the effectiveness of the 1K17. First and foremost, despite its much longer range than a conventional tank, it could only engage opponents while maintaining line of sight with them. This left it vulnerable to artillery attack and limited the lasers’ effectiveness in bad weather (though Soviet officials claimed the lasers were powerful enough to punch through cloud cover).

Ultimately, it seems the high cost of the laser platform coupled with the economic woe that followed the Soviet collapse, conspired to make continued funding impossible. The program was scrapped shortly after the Russian military took delivery of its prototypes. Similar programs, however, remained in development. Today, Russia continues its work on laser weapons with similar aims. A few years ago, they announced a new Electronic Warfare laser they were developing to destroy everything from optical targeting systems to spy satellites.

In keeping with Russia’s legacy of media bluster, this new weapon is said to be able to simply “switch off” enemy weapon systems.

“It will fully suppress communications, navigation and target location, and the use of high-precision weapons,” said Vladimir Mikheyev, an adviser to the KRET first deputy CEO.

“The system will be used against cruise missiles and will suppress satellite-based radio location systems. It will actually switch off enemy weapons.”