Russia's KV-1 Tank Had Impressive Armor, But It Was A "Death Trap" For One Simple Reason 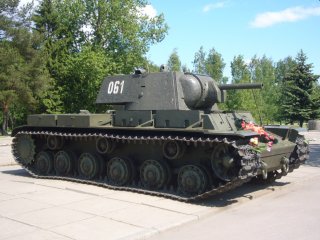 Here's What You Need To Remember: The KV-1’s transmission, which Kotin borrowed from a U.S.-made tractor, simply sucked. But one of the tank’s biggest problems was the fact the crew could barely see out of damn thing.

A day after the German blitzkrieg into the Soviet Union in June 1941, more than 200 Nazi tanks were powering through Lithuania on a race northward to Leningrad.

Desperate to staunch the bleeding, on June 23 the Red Army sprang its KV-1 and KV-2 tanks — which at the time packed some of the heaviest tank armor in the world — on the advancing Germans near Raseiniai.

Soviet tanks were renowned for their ruggedness and reliability— though not their comforts — during World War II. And early in the war, the lumbering Kliment Voroshilov tanks could easily deflect the shells from most of Germany’s field weapons.