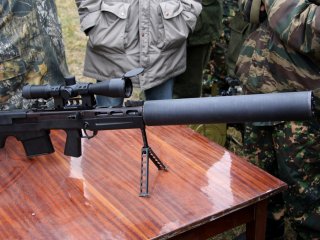 Russia has a rich history designing exotic bullpups in variety configurations and calibers. While most of those Soviet designs are forty or more years old (and were never standard issue), Russia does have several bullpups in their armories that fill very specific niche roles. These two platforms are optimized for urban and close-quarters combat— and fire enormous .50 caliber rounds to boot. Here are two highly-specialized Russian bullpup platforms.

The case is conventional brass, although it is a straight wall cartridge, an unusual feature in modern rifle ammunition, more akin to ammunition used in revolvers. This means that the brass case does not have a bottleneck where the bullet is seated, but rather is the same diameter around the base and the neck. Generally speaking, this result is less pressure in the case when the primer is struck, and less pressure behind the bullet during is movement through the barrel.

First: when silence is needed. The STs-130 is subsonic and therefore much quieter than conventional supersonic ammunition. When coupled with a suppressor, there is a marked difference in noise.

Additionally, this heavy slow-moving bullet is optimized for massive stopping power— without risking over-penetration. In a tight urban or indoor environments, collateral damage can be caused by stray shots passing through walls, vehicles, or people and causing unintentional damage. Not so with the STs-130, which deposits massive amounts of energy on target, without over-penetration.

The STs-130 comes in several different varieties, with different bullets optimized for different platforms and purposes. Variants include standard, armor-piercing, and even an increased accuracy round, reportedly made of solid bronze. Ammunition that can be fired safely in the VKS cannot necessarily be fired with ASh-12.7, as the VKS’ ammunition is significantly longer and heavier, which could potentially cause feeding problems if it could even be chambered.

The ASh-12.7 is optimized for urban, close-quarters combat where space is at a premium, and range is limited by walls and buildings. It’s compact design allows it to have a high barrel-to-length ratio. This allows for quick movement and greater maneuverability, although there are some shortcomings to the bullpup design such as lower situational awareness and poor ergonomics for left-handed shooters.

The rifle has two firing modes, semi and auto, plus safe. Because the ammunition is subsonic, effective firing range is a modest 300 meters or so, although this would not necessarily be a problem in close-range, urban environments.

The rifle features a large multiple-baffle muzzle brake to help control recoil, especially during automatic firing. It can also be equipped with a silencer, further reducing the subsonic ammunition’s acoustic signature. One variety of ammunition for the ASh-12.7 is a double, or duplex round, which is essentially two bullets stacked one on top of the other.

Also a bullpup design, the VKS is optimized for close-quarters, urban combat environments. Interestingly, this rifle appears to be a straight-pull bolt-action, rather than a semiautomatic.

Effective firing range is nearly double that of its .50 caliber ASh-12.7 cousin, reportedly up to 600 meters— not bad for a subsonic bullet. The VKS is also equipped with a large silencer nearly the length of the entire barrel, similar to the VSS Vintorez, or the AS Val.

Whereas those two platforms are optimized for penetrating standard-issue NATO body armor, the VKS makes use of specially designed ammunition to prevent penetration. While the case for VKS ammunition is the same case used for ASh-12.7 ammunition, the bullets are much longer and heavier, and probably too long to load in the ASh-12.7 rifle. The heaviest loads are reportedly 76 grams or 1170 grains—by comparison, the standard 5.56x45mm NATO bullet weighs 4 grams or 62 grains. One of the loads is even machined from solid brass for better accuracy.