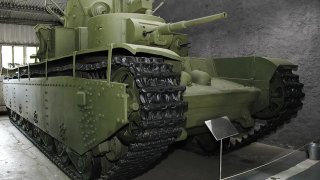 Here's What You Need To Remember: The T-35 was a formidable machine, but its own design flaws doomed it.