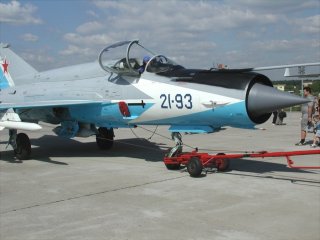 Here's What You Need to Remember: The Russian-built MiG-21 might be old, but many air forces around the world keep upgrading the durable plane. In fact, it could see service in different countries for years to come.

Military aircraft can have notoriously short lifespans, especially during periods of technological ferment. The most elite aircraft of World War I could become obsolete in a matter of months. Things weren’t much different in World War II. And at the dawn of the jet age, entire fleets of aircraft became passé as technologies matured. The advanced fighters that fought in the skies over Korea became junk just a few years later.

But a few designs stand the test of the time. The B-52 Stratofortress first flew in 1952, yet remains in service today. New C-130s continue to roll off the production line, based on a design that became operational in 1954.

But those are bombers and transport aircraft; they don’t fight one another. Fighters face a special problem of longevity, because they must compete directly with newer models. Thus, very few fighters have had long lifespans, either in production or in service.

With the MiG-21, engineers sorted through a set of basic problems that future research could not substantially improve upon. Modern fighters don’t fly much faster than the MiG-21, or maneuver much more capably. While they do carry more ordnance and have more sophisticated electronic equipment, many air forces can treat these as luxuries; they simply want a cheap, fast, easy-to-maintain aircraft that can patrol airspace and occasionally drop a few bombs. The Fishbed fits the bill.

In Vietnam, pencil-thin MiG-21s found that they could take advantage of American rules of engagement by using their size and speed to cut through bomber packages before U.S. fighters could visually identify and target them. The size and maneuverability of the Fishbed also allowed them to evade early air-to-air missiles. After attacking, the MiGs would run for home.

The success of Western aircraft against the Fishbed in the Middle East, as well as in Angola, caused many to conclude that Soviet fighters were outclassed by their Western counterparts. However, pilot training issue make comparison difficult. The MiG-21 performed more than adequately in comparable pilot training contexts. For example, Indian MiG-21s flew in the 1965 Indo-Pakistani War, and achieved kills in the 1971 War and the Kargil War. Fishbeds also acquitted themselves well in air combat in the Iran-Iraq War.

The MiG-21 currently serves in eighteen air forces worldwide, including two members of NATO (Romania and Croatia). Fishbeds flew in about forty other air forces (counting is difficult because sometimes countries ceased to exist before the MiGs that served them) since 1960. The J/F-7 serves another thirteen countries, and has been retired by four. China, Russia, and Ukraine still carry out maintenance and update work on existing aircraft. The advent of 3D printing may make it even easier for current operators to keep their Fishbeds in service, as they can produce spares and upgrades in country.

This hardly means the end of the Fishbed, however. Many of the J-7 and F-7 models remain of fairly recent vintage, and can stay in service for quite some time. Bangladesh acquired the last dozen F-7s in 2013, and won’t need a replacement anytime soon. And plenty of air forces simply have no requirement for anything much more sophisticated or expensive than a Fishbed. There may never be a hundred-year fighter (although the B-52 may quite possibly reach that number before final retirement). The MiG-21 will easily reach sixty, however, and probably seventy without breaking a sweat. It remains one of the iconic fighters of the supersonic age.

Robert Farley, a frequent contributor to the National Interest, is author of The Battleship Book. This first appeared in 2019.