Russia's MiG-23 Was a Real 'Flying Coffin': The Engine Had Explosion Problems 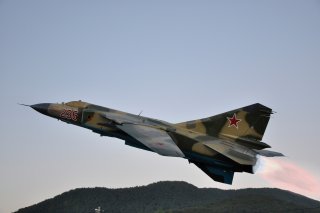 Key Point: The MiG-23 holds the unlucky reputation as an accident-prone and ineffective fighter.

Although not exactly the same airframe, the distinction between the MiG-27 and MiG-23 is minimal. The MiG-27 is slightly modified for a ground-attack role, but the airframes and flight characteristics are quite similar.

In a lovely interview with Hush-Kit, a former Indian MiG-27 pilot gave an interview about his experience with the airframe. Answering the question “What are the worst things about the MiG-27?” pilot Anshuman Mainkar said,

“At a time [the MiG-27 was] counted as one of the most powerful single-engined fighters in the world, it has a few teething issues with the power-plant, but that also had to do with age, engine rating, and maintenance issues. In my opinion, it is the only fighter that has ‘engine explosion’ as a standard aircraft emergency. But a real issue was the air-conditioning, which only kicked in climbing past 6000’. At low-levels it’s hot / hotter / hottest temperature settings (as fondly known in the IAF) did not offer much respite.”

Not such a great review, but one of the defining characteristics of the MiG-23 platform: unreliable and dangerous.

The MiG-23 was intended to replace the capable MiG-21, which though fast and fairly capable among its contemporaries, was hindered by primitive radar and a modest weapons capacity.

One of the MiG-23’s major design considerations was handling at low speeds, and short take-off distance.

The MiG-23 utilized a variable geometry wing design, the first Soviet airframe with the capability. A swept-wing design is an exercise in practicality in which wings could be swept back, to a 72-degree angle for high altitude, high speed, unfurled at 16 degrees for lower speed cruising, or midway between the two at a 45-degree angle for combat maneuvering.

Originally seen as a sort of cure-all for different flight speeds, variable-sweep wing geometry was actually not all it was cracked up to be. Although the adjustable sweep solved the short take-off problem, adjustable wings have to be structurally reinforced, making them heavier than typical fixed-sweep wings.

One of the other design requirements — a larger weapon capacity than its predecessor — was fulfilled by a 23 millimeter auto cannon on the plane’s underbelly. Our friend Anshuman Mainkar had the following to say about the airframe when engaging the 23-millimeter cannon.

The MiG-23 was not widely exported, as its shortcomings were hard to mask. The last MiG-23s are operated mostly by Middle Eastern or African countries or held in reserve. Probably fitting for a jet with exploding engines.

Caleb Larson is a Defense Writer with The National Interest. He holds a Master of Public Policy and covers U.S. and Russian security, European defense issues, and German politics and culture. This article first appeared earlier this year and is reprinted due ot reader interest.