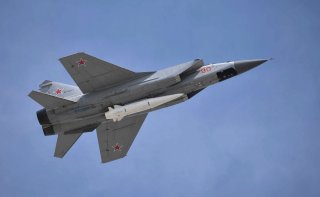 Here's What You Need To Remember: The plane continues to be the backbone of Russia's air-interception program.

In the 1980s, the MiG-25 was followed up by the MiG-31, which added in a second weapons systems officer on all models and increased the flight performance, radar and weapons of the craft. Early versions also featured a cannon, but this was quickly deleted once it was determined that such extras were not necessary on a pure interceptor.

Nowadays the MiG-31 is the standard long range interceptor of the Russian Air Force (the VPVO was merged with the VVS in the 1990s) and is expected to serve into the 2030s. A “mid-life upgrade” of the MiG-31 is currently being procured: the MiG-31BSM. This modification integrates many new strike weapons onto the MiG-31 and modernizes most systems. The MiG-31 was also chosen as the primary carrier aircraft for the Kinzhal hypersonic missile.

Another possible reason is that Russia wishes to keep the heritage of MiG alive within United Aircraft Corporation (UAC). Since Sukhoi has done the majority of the design work and has had its name attached to the PAK FA (in the Su-57 designation), MiG needs a next generation project of their own to work on. The MiG-35, while advanced, is still not of the PAK family of next-generation craft and MiG not have an aircraft to work on in the future.

Charlie Gao studied political and computer science at Grinnell College and is a frequent commentator on defense and national-security issues. This article first appeared in August 2018.