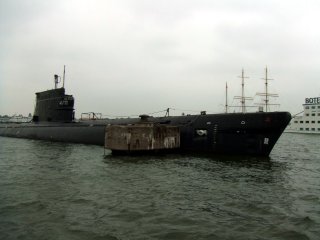 Here's What You Need to Know: One of the six new weapons unveiled by Russian president Vladimir Putin during his 2018 state address, Poseidon is a nuclear-powered underwater drone armed with a two-megaton atomic payload.

The Belgorod is a massive, bespoke special-purpose vessel that was built from the hull of an unfinished Oscar-II cruise missile submarine. It can reportedly house everything from Losharik mini-submarines to  Klavesin-2R underwater drone submarines. It appears that the Belgorod—the first submarine to carry Poseidon drones—can accommodate as many as six units. Russia plans to deploy just over thirty Poseidon drones in total. With its unique construction history, the Belgorodcannot easily be reproduced; it would not be cost-efficient to do so in any case. Instead, the Navy has laid plans for a new line of submarines specially built to accommodate Poseidon drones. The Khabarovsk class, also known as Project 09851, is widely expected to consist of four submarines that displace around ten thousand tons and are capable of carrying up to eight Poseidon drones. The lead submarine Khabarovsk is expected to be commissioned in 2023, with the second—Ulyanovsk—to follow by 2027. No production timeline has been provided for the remaining two Khabarovsk vessels. Given the long-term nature of this project, there is a possibility that the follow-up vessels to the Khabarovsk will differ substantially from the former and be designated as part of a different class to reflect those potential changes.