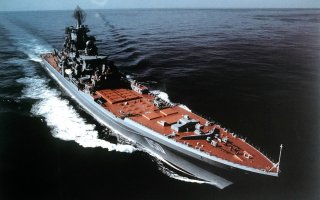 Case in point: Last week the Russian Navy was told that the handover of the Project 11442M Admiral Nakhimov nuclear-powered battlecruiser would be a little while longer in coming. It had been scheduled to re-enter service sometime next year, but the delivery has now been pushed back.

"Due to problems with suppliers, the handover of the Admiral Nakhimov cruiser to the fleet is postponed until 2023 at best," a defense industry source told Tass on Wednesday.

The key takeaway was "at best," as the press service of the Sevmash shipyard, where the warship is undergoing the repair and modernization work, has not commented officially. However, it was only last August during the Russian Army-2020 forum that Sevmash CEO Mikhail Budnichenko said that the modernization efforts were proceeding according to schedule.

At the time it was actually believed that the nuclear-powered cruiser would in fact begin sea trials sometime later this year, with the ship on track to be handed over to the Russian Navy in 2022.

Russia's Battlecruiser: Worth the Wait?

All good things come to those who wait, and following the current modernization efforts, the Admiral Nakhimov will certainly be the most powerful warship in the Russian Navy, and possibly the world. It will be outfitted with various radars and advanced sensors, while it will be fitted with a variety of offensive and defensive weapons.

According to Tass, the upgraded cruiser will be armed with hypersonic Tsirkon missiles, anti-ship Onyx missiles and Kalibr cruise missiles. The air defense systems include the Fort-M and Pantsir-M, while the battlecruiser will also carry a variety of powerful antisubmarine weapons.

The Kirov-class cruiser joined the Soviet Navy as the Kalinin in 1988. She was renamed in 1992 in honor of Pavel Nakhimov, the admiral of the Imperial Russian Navy who commanded the naval and land forces during the Siege of Sevastopol during the Crimean War in the 1850s.

The warship has actually spent more time undergoing modernization than at sea, so while the potential capabilities have long been touted by Moscow, the question must be asked whether the efforts will actually pan out. By the end of the Cold War, the battlecruiser had rarely been deployed and it entered the Sevmash shipyard in 1997, and since 1999 she has been permanently docked while waiting for the refit to be completed.

The work finally began in earnest in 2013, but it was only last June that the head of Russia's United Shipbuilding Corporation Alexei Rakhmanov announced that repairs on the missile-carrying cruiser had reached the 50 percent mark. He said at the time that completion of repairs was expected by the end of 2022.

With the most recent delays, the refit and modernization could surpass a decade. While this could be a capable warship – and one of the most powerful in the world – Russia has to actually get it out to sea, and who knows when that will actually occur.