Russia's T-14 Armata Tank Is Powerful, But Israel's Merkava Dominates In One Area 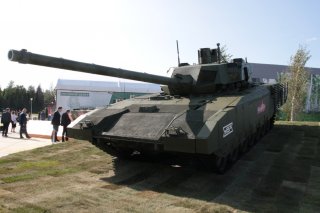 Here's What You Need To Remember: The Israelis’ massive situational awareness advantage given the capability of the Iron Vision system will give Tel Aviv’s seasoned tank crews a decisive advantage over the T-14 or any other Russian tank until Moscow develops an equivalent capability. In armored warfare, the crew that sees the enemy first almost always wins.

With its ongoing campaign in Syria proving to be a useful live-fire operational test and evaluation process for its latest weapons, it is perhaps not inconceivable that the Kremlin might eventually deploy the T-14 Armata main battle tank to that war-torn country.

The Russians are currently building 20 prototypes of the new tank and could build as many as 100 of the new vehicles for the Kremlin’s elite Taman Division. If the Kremlin did deploy some number of T-14s to Syria for operational evaluations under genuine combat conditions, there is a possibility the machines could face off against Israeli Merkava tanks if Tel Aviv chose to make a ground incursion into Syria.

The latest Israeli Merkava IVm Windbreaker is an excellent tank that is equipped with the Trophy active protection system (APS), Tzayad battlefield management system and advanced survivability features such as modular armor. Moreover, the Merkava IV will likely continue to improve—perhaps incorporating a revolutionary feature in the form of the Elbit Iron Vision helmet-mounted display system, which would allow crew members to “see” the world outside the tank via a series of external cameras without opening the vehicles’ hatches. The system, which provides unprecedented situational awareness, was tested in 2017 but it is not clear when it will be fielded—but it will be soon. Israel is the first to develop such technology, but Russia could eventually field similar hardware.

“The discussion among experts now revolves mainly around the question of whether the commander lacks the necessary overview when sitting in the tank or whether TV cameras and electro-optical aiming devices can actually provide the same information as the optical aiming devices and observation equipment on the current generation of battle tanks,” Captain Stefan Bühler, graduate engineer at the University of Applied Sciences, Explosive Ordnance Disposal Officer at the NBC-KAMIR Competence Center for the Swiss Armed Forces and Commander of Tank Squadron 12/1,wrote. “A look into the sky provides the (technical) answer: the pilot of an F-35 can look through the aircraft with his head-up display – a computer generates a virtual 3D world from the video signals from the cameras mounted all around, which is then faded into his optics depending on the pilot’s direction of vision. With such technology, as offered by the Israeli company ELBIT Systems under the name ‘Iron Vision’ for use on armored vehicles, the commander of a T-14 could see even more than the commander of a battle tank with a manned turret.”

Further, given its combination of active protection systems, reactive armor and passive laminated armor, the T-14 could possibly offer better protection for its crew than a comparable tank such as the Merkava, which is a more survivable machine than either the Leopard 2 or Abrams. Bühler argues that the Armata’s unmanned turret offers some survivability advantages over manned turret designs. “Based on all these considerations, it must be assumed that the T-14 Armata offers the crew a higher overall level of protection than its western counterparts, despite its significantly lower combat weight,” Bühler wrote.

In terms of sensors and situational awareness, the Israelis almost certainly retain a massive advantage over the Russian T-14. However, Bühler notes that sensors are a problem for all tanks. “Compared to older optical systems, video cameras and electro-optical scopes are neither more nor less vulnerable to enemy fire or splintering. Optics are, and will remain, the Achilles’ heel of a battle tank, including the T-14,” Bühler wrote.

The disadvantage of the Armata’s unmanned turret is situational awareness. The commander cannot pop his head out of the vehicle to maximize to see. That problem could be solved by technology such as Iron Vision, but it is not clear that the Russians have that technology. It is certain that Moscow does not have such technology installed on the current versions of the T-14, but it could eventually as Bühler notes. The Israelis’ massive situational awareness advantage given the capability of the Iron Vision system will give Tel Aviv’s seasoned tank crews a decisive advantage over the T-14 or any other Russian tank until Moscow develops an equivalent capability. In armored warfare, the crew that sees the enemy first almost always wins.