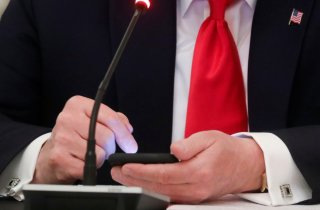 President Donald Trump’s random tweets make it hard for allies, and potential adversaries, of the United States to understand its policies and, potentially, to de-escalate dangerous situations, says former US ambassador to the United Nations Samantha Power.

Interviewed by journalist Stan Grant as part of ASPI’s ‘Strategic Vision 2020’ online conference series, Power said that if China were not talking to Trump on any given day, it would have no idea how to communicate with his government.

‘So this dysfunction in terms of governance, which has hurt us so much in the pandemic, also really doesn’t allow us to feel secure that if there was, let’s say, in a freedom of navigation operation in the South China Sea, some kind of unintentional clash, where would the de-escalate story moves come from?’

To avoid confrontation, people around Trump had to be empowered to maintain channels of high-level communication. ‘But if you’re a senior Chinese official, if you are not talking to the president of United States on a given day, you’re not confident even that the channel is a relevant channel.’

And while the US under Trump was retreating from international institutions, a much more transactional and heavy-handed tenor had been brought to its core alliances, Power said.

‘When China is rising economically and throwing its weight around, is that the right time to make your allies question your staying power, your bond, your truthfulness, your reliability, however you want to slice it?’ Power said that had left NATO and other key US allies off balance and not sure about the constancy of the United States. ‘That is abetting, or at least accompanying, what [Chinese] President Xi [Jinping] is doing.’

All of this was happening as Washington shifted into a very confrontational posture towards Beijing, Power said, ‘but I’m sure that your prime minister is learning of America’s plans and America’s statements and this strategic shift in tweets and speeches in the same way as Trump’s closest advisers.’

That was not to knock the closeness of the US–Australia relationship, she said. ‘I mean, Trump’s own cabinet doesn’t know where Trump is going day to day.’

Trump had, arguably, way too much tolerance for risk, friction and chaos, Power said.

She said she’d learned a lot as a war correspondent and an activist, then working in Barack Obama’s Senate office and on a political campaign where ‘I got battered and bruised and had to resign in humiliation’. She went on to be a White House staffer, and finally a diplomat representing the US. ‘Now I’m back to being a citizen and throwing things at the television.’

She’d been an intern at a television station when the unedited and shocking feed arrived of the Tiananmen Square massacre of protesting students. ‘And so what I witnessed was the uncut raw footage of kids being mowed over by tanks and trying to flee on their bikes and putting their friends and loved ones on the basket of the bike and tottering away.’

Power said the US and its allies were now so struck by the risk of armed conflict that they could ‘lose sight of the dog that’s not barking’—climate change. Because Trump had pulled the US out of the Paris agreement, the nation would have to meet those commitments and make up for lost time. ‘Paris was never enough.’

She described how she had graduated in a time after the Soviet Union collapsed when it seemed that authoritarianism had been permanently vanquished and that everybody was trending in a more liberal direction.

Now she feared the divisions that were being created in the US during the pandemic. ‘There’s a lot of anti-Chinese animus being stirred, including with really devastating effects for Asian Americans living in the US, and hate crimes up, and taunts. And it’s really disturbing what the effects of this kind of rhetoric calling it the “China virus” again and again and stirring people up in this way’, Power said.

‘But offsetting that, there’s not an appetite for war in this country. There is huge war fatigue out of the overextension in the Middle East.’

Power warned that conflicts were going to last longer as they became more and more complex. ‘And not only are we underinvesting in Australia and in the US in our diplomacy, but even if we were all in and actually empowering our diplomats and funding them and staffing out in the way that we needed to, it’s just getting much, much harder for outsiders to play a role because of the number of stakeholders now who are making money off of other people’s misery.’

In weakened states, it was easier for non-state actors, including terrorists, to wreak havoc and harder to get a pandemic in check.

If Joe Biden won the November election, Power said, he’d face a massive task domestically. In terms of the United States’ global role, ‘the strength of our democracy is our best form of leadership internationally’.

A Biden administration would need to work with America’s closest allies, ‘recognising that our alliances are not nice to have, they’re need to have in the 21st century.’

This article first appeared in the Australian Strategic Policy Institute's The Strategist.