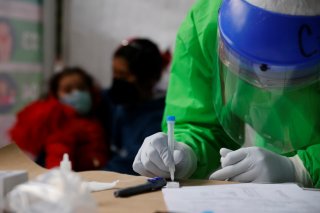 Rising COVID-19 numbers have placed much of Canada on the edge of seemingly inevitable lockdowns, just as winter begins. Having failed to contain the disease, with one lockdown behind us and another before us, it feels as if Canadians outside of Atlantic Canada are trapped on an unending rollercoaster of despair.

Even more demoralizing, it’s increasingly obvious that we don’t even need to be on this ride.

As the International Monetary Fund notes, Asia-Pacific countries as diverse as Australia, New Zealand, South Korea and Taiwan have crushed the curve, and their citizens are able to get on with their lives. Cafés are full, crowds cheer live sports events. People aren’t dying.

COVID-19 may be a natural phenomenon, but our economic wounds are almost entirely self-inflicted, driven by the faulty assumption of a trade-off between keeping the economy going and fighting the pandemic.

This assumption is on full display in Ontario’s much-criticized and recently revamped colour-coded “COVID-19 response framework” that imposes restrictions based on a region’s COVID-19 prevalence.

Its tagline — “keeping Ontario safe and open” — explicitly assumes that it needs to keep the economy open for as long as possible during the pandemic. The unstated corollary is that protecting the economy requires suffering through a certain number of illnesses and deaths.

On its face, perhaps this makes some sense: we don’t want small businesses to go bankrupt or for people to lose their jobs. But it gets the economy/health trade-off exactly backward.

To save the economy, stomp the virus

To put it bluntly, saving the economy requires minimizing, if not eliminating, community COVID-19 transmission. As economist Martin Eichenbaum and his co-authors note in a July VoxEU article, community transmission itself reduces economic activity. Many people won’t risk their lives even for the most delicious restaurant sushi.

The upshot is that even with no, or limited, government intervention, we’re going to end up in a recession and also with an overwhelmed health-care system, made worse when people living paycheque-to-paycheque are forced to work while ill.

Attempting to keep the economy and society operating normally for as long as possible effectively requires workers and consumers to subsidize businesses with their very lives. And, as we’re witnessing firsthand in North America and Europe, it doesn’t work. It can’t help but lead to recessions, business failures and recurring lockdowns. And death.

While Ontario’s government and others have assumed that dealing with COVID-19 hurts the economy, the economy is actually damaged by not dealing directly with the pandemic. The two are linked, but in a positive-sum relationship: Address COVID-19, save the economy.

Fortunately, while this coronavirus may be novel, it presents a straightforward economic problem and response.

Our situation involves what economists refer to as “negative externalities.” These are individually rational decisions — “I have to work to pay the bills,” or “I can’t go to the restaurant because I don’t want my parents to die” — with socially negative effects. In this case, that’s spreading the disease or reducing economic activity.

Economists have a ready-made response to deal with negative externalities: Government must step in to mitigate the social damage. In this case, such a response involves strong containment measures that aren’t relaxed prematurely, as we’ve done in most of Canada. Such relaxations offer only the illusion of economic revival and instead, as Eichenbaum and his co-authors note, will result in “a surge in infections, epidemic-related deaths and a subsequent second recession.” This is our current path.

Empirical evidence from the Asia-Pacific region suggests that protecting the economy almost certainly requires a goal of zero (or near-zero) COVID-19 transmission, as proposed by several Canadian medical doctors under the Twitter hashtag #COVIDzero, and the Montréal-based think tank, Global Canada.

As the Australian National University’s Stewart Nixon reports, countries that managed to control the pandemic have performed better economically than those that have not. He further argues that “over the long term, sustained virus containment should further promote a stronger economic recovery.”

Such support, while costly, is almost certainly a bargain compared to the true cost of muddling through: businesses facing reduced demand, dreading the fallout from the next lockdown; spiralling health-care costs; reduced short- and long-term productivity; and, not least, lives ruined by preventable illnesses and deaths.

Keeping businesses open as long as possible is a short-term strategy that will only delay and exacerbate longer-term economic and social suffering. It’s the opposite of business-friendly.

Getting COVID-19 numbers to or near zero, alongside extensive support to businesses, workers and families, requires short-term sacrifice. But as Australia, New Zealand, Taiwan and other countries have shown us, it’s the surest path we have to economic and societal recovery. It’s time to get off this rollercoaster.