SCOTUS: The Constitution Still Applies, Even During a Pandemic 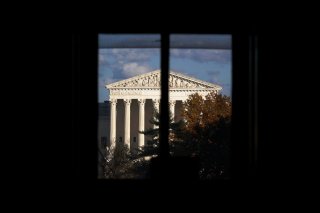 Late on the night before Thanksgiving, the Supreme Court granted an injunction against New York State’s restriction on religious services, with 10- or 25- person occupancy limits depending on whether the gathering is in a “red” or “orange” zone, respectively, according to viral prevalence. Although the justices split 5–4, with Chief Justice John Roberts voting to deny the injunction on a technicality, it seemed like a no‐​brainer: houses of worship were treated differently than many similarly situated secular facilities, so the state executive order couldn’t stand as a basic First Amendment matter (and also equal protection, though the Court didn’t discuss that framework).

I called it a “Thanksgiving miracle,” with the Court finally pushing back on expansive and arbitrary COVID‐​era restrictions rather than blindly deferring to government officials. Then I went on to enjoy the long holiday weekend—Thanksgiving is my favorite holiday—with minimal time on social media or reading anything work‐​related.

So it was with sadness if not surprise that I discovered that the last few days have seen an explosion of anger and disbelief from progressives, academics and Twitter trolls alike. The criticisms seem to boil down to two major lines of attack: (1) the Court is privileging religion over everything else; and (2) the Court isn’t taking the pandemic seriously, or is substituting its own ill‐​considered scientific views for those of expert health officials. And overarching both of these points is the construct through which many on the left now view the High Court: that a conservative majority is simply imposing its ideology, regardless of what law or precedent might dictate.

Those arguments betray a misunderstanding of Roman Catholic Diocese of Brooklyn v. Cuomo—not surprising given how fact‐​specific most pandemic‐​related cases are—and read more into it than what it actually says. They also probably extrapolate from Justice Neil Gorsuch’s provocative concurring opinion, with which I ultimately agree but which isn’t necessary to decide the case (which is why it’s a concurrence). Let me explain.

Of the 33‐​page document the Court released on All Turkeys’ Eve, barely more than six pages constitute the actual per curiam (“by the court”) opinion. It’s a very streamlined analysis—as one might expect in response to an application for injunctive relief pending appeal (not a fully briefed and argued case on the merits)—that makes the following simple points:

In short, the justices in the majority, while accepting that they “are not public health experts” and fully respecting “the judgment of those with special expertise and responsibility in this area,” still had to hold public actions to the constitutional fire—and in this case found them wanting. “[E]ven in a pandemic, the Constitution cannot be put away and forgotten.”

Chief Justice Roberts, for his part, did not take issue with any of the above analysis, noting that “capacity limits of 10 and 25 people, depending on the applicable zone, do seem unduly restrictive. And it may well be that such restrictions violate the Free Exercise Clause.” But the reason he would’ve denied the injunction is that, after the Diocese and Agudath Israel asked the Supreme Court for relief, the governor revised his zones such that none of the houses of worship involved in this case were subject to those restrictions. “It is not necessary,” Roberts concluded in his typical minimalist manner, “for us to rule on that serious and difficult question at this time.”

The majority responds to that prudential argument by saying that “injunctive relief is still called for because the applicants remain under a constant threat that the area in question will be reclassified as red or orange.” In other words, the case isn’t moot. Indeed, Governor Andrew Cuomo “regularly changes the classification of particular areas without prior notice”—eight times in the previous five weeks. There’s a very strong likelihood that the issue could arise again, so it’s important to decide the issue (at least pending appeal) now.

Some have pointed to the following passage from Justice Gorsuch’s concurrence as evidence of at least his glib disregard for the seriousness of the situation: “So, at least according to the Governor, it may be unsafe to go to church, but it is always fine to pick up another bottle of wine, shop for a new bike, or spend the afternoon exploring your distal points and meridians. Who knew public health would so perfectly align with secular convenience?”

But Gorsuch isn’t saying that the state’s police power can never be used to close churches, or that he knows better than public health officials what a reasonable or necessary restriction is to slow viral spread. He’s just saying that the rules have to apply equally to all—and that courts have been too deferential to executive officers who “have asserted the right to privilege restaurants, marijuana dispensaries, and casinos over churches, mosques, and temples.”

It’s the arbitrariness of the essential/​nonessential distinction that’s the problem, not the closings. As he concludes, “while the pandemic poses many grave challenges, there is no world in which the Constitution tolerates color‐​coded executive edicts that reopen liquor stores and bike shops but shutter churches, synagogues, and mosques.”

For his part, Justice Brett Kavanaugh goes out of his way to say that “the COVID–19 pandemic remains extraordinarily serious and deadly” and that he doesn’t “doubt the State’s authority to impose tailored restrictions—even very strict restrictions—on attendance at religious services and secular gatherings alike.” But here the restrictions aren’t tailored to the circumstances, particularly in light of the constitutional rights involved. Even if New York’s rules require movie theaters and certain other spaces to remain completely closed, “under this Court’s precedents, it does not suffice for a State to point out that, as compared to houses of worship, some secular businesses are subject to similarly severe or even more severe restrictions.”

There’s a further important back‐​and‐​forth among the justices about the meaning of Chief Justice Roberts’s concurrence in South Bay Pentecostal Church v. Newsom, deferring to California’s governor on religious‐​service restrictions in the early months of the pandemic. Courts have cited that squib of an opinion 114 times to support various lockdowns but, as Josh Blackman put it, “the 115th citation sank it.” I’d say more on that — the chief justice himself wrote in Diocese of Brooklyn that courts have been reading his South Bay words too expansively, but this post has already gone on too long.

The main point is that, as I wrote in my essay “State Police Powers and the Constitution”— part of Cato’s Pandemics and Policy series—“State and local officials have broad power to govern for public health and safety, but there are limits—for example, on the powers themselves and who exercises them.” Moreover, measures that are reasonable in the rapid response to the start of an emergent health crisis with a lack of epidemiological data will often prove unreasonable once we have a better understanding of the challenges.

Blunderbuss shutdown orders have overstayed their constitutional welcome and it’s great to see the Supreme Court’s starting to guard the guardians. To quote my favorite line from Justice Gorsuch’s Diocese of Brooklyn opinion, “Even if the Constitution has taken a holiday during this pandemic, it cannot become a sabbatical.”

Postscript: On Sunday, France’s highest court ordered the government to review a law limiting church attendance to 30, saying the restriction wasn’t proportionate to the risk of COVID-19 transmission.