Screen Time, Snacking and Chores: How Everyday Life Changed During the Coronavirus Lockdown 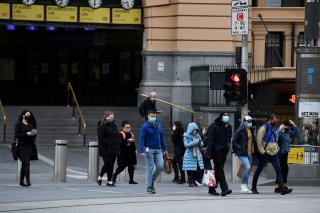 With Victorians in Australia heading into a new round of even harsher lockdown measures, there will again be a focus on how people will cope — the various ways such restrictions change lifestyles and how we adapt to them.

New data from the Australian Bureau of Statistics provides a snapshot of how Australians changed their behaviours, activities and consumption patterns as people were forced to stay home during the country’s first COVID-19 lockdown earlier this year.

To understand how the virus affected people’s everyday lives, the ABS ran a fortnightly survey with the same group of 1,000 people from April 1 to July 10. Here are some of the key findings.

Lockdown restrictions began to be implemented in Australia from mid-March. Not surprisingly, in the first ABS survey in early April, respondents reported some immediate changes, such as a loss of contact with other people.

Just under half of people reported having no in-person contact with friends or family outside their household. Nearly all had used phone and video calls and text messages to keep in touch.

By mid-April, financial hardship was also starting to set in for people. Nearly a third of respondents reported their household finances had worsened due to COVID-19.

People’s mental health was also beginning to suffer by mid-April. Compared with a pre-COVID health national survey of Australians, twice as many people reported feelings of anxiety at some point. One in nine Australians also felt hopeless at least some of the time.

More women and younger people reported these feelings compared with men and people aged 65 years and over.

Working From Home and Changes in Diets

Survey results from early May 2020 began to show how people were adjusting their lifestyles to the new routines. Restrictions had just started to ease slightly at this point.

People were spending their money on other purchases instead. From early April to early May, one in five people reported eating more snack food, while 13% of respondents were eating more fruit and vegetables.

Purchase of takeaway or delivered food declined over this period, with almost a third of respondents reporting less frequent consumption.

Perhaps contrary to popular belief, the overwhelming majority of people were not drinking more in isolation. Just 14% of people reported increasing their alcohol consumption.

During the early May phase of the lockdown, people were also seeking solace in home-based activities.

Though a majority of people (60%) were reporting more time on screens during lockdown, others were turning to hobbies and other activities.

When it came to physical health and exercise, though, just one in four people had increased their level of physical activity during lockdown, while one in five had actually spent less time exercising.

As more restrictions began to ease around the country, people began to think about what they would do once lockdown ended. By late June, Australians’ mental health had improved compared with the height of the lockdown in April.

Fewer people reported feeling stressed, lonely, restless, nervous or that everything was an effort.

More than 90% were still keeping their distance from others, but fewer were avoiding social gatherings.

Interestingly, the easing of restrictions did not change other lifestyle routines that significantly: many people were still spending a lot of time on screens and with pets, cooking, baking and online shopping compared with before the lockdown period.

An Optimistic Outlook, Except For Victorians

When the final ABS survey was conducted in early July, things were looking brighter for most Australians.

Three in five respondents reported their mental health status as good or very good. Most people had an optimistic outlook on the future, with over half believing life had already returned to normal or would return to normal within six months.

The big exception was people living in Victoria. In late June and early July, Melbourne had begun to experience a second wave of infections and a re-introduction of restrictions.

Not surprisingly, only 2% of Victorians said their life had already returned to normal or had not changed due to COVID-19.

Where To From Here?

The ABS has finished this survey, but is starting a new monthly survey in August, with a new group of respondents. This survey will also focus on Australians’ everyday lives and well-being during the pandemic.

There are also many university-based social research projects currently underway. Once completed, their findings will provide a more detailed picture of how life has changed in Australia during COVID-19 — a situation that continues to evolve day by day.