The Secret 'B-2 Bomber' History Has Forgotten About 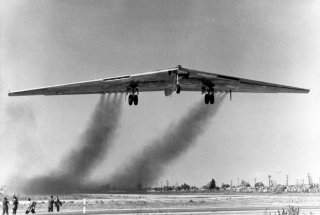 Here's What You Need to Remember: The B-2 Spirit, while utilizing radically different technology, bears a strong visual resemblance to its distant cousin. Indeed, the two aircraft share exactly the same wingspan. Northrop adopted the flying wing shape for the B-2 because it offers the advantage of a low radar cross-section.

Northrop would not realize success in an all-wing airframe until decades later. The B-2 Spirit, while utilizing radically different technology, bears a strong visual resemblance to its distant cousin. Indeed, the two aircraft share exactly the same wingspan. Northrop adopted the flying wing shape for the B-2 because it offers the advantage of a low radar cross-section. Advances in fly-by-wire technology have made the B-2 much easier to fly than the YB-49 (or the YB-35). All indications suggest that Northrop Grumman’s B-21 Raider stealth bomber will have a similar configuration, as will the Xian H-20 strategic bomber and the Tupolev PAK DA.