See This Sniper Rifle? It Was Used To Assassinate President John F. Kennedy 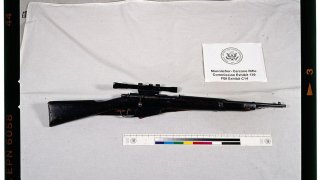 Here's What You Need To Remember: Lee Harvey Oswald paid less than $20 for the murder weapon.

Kennedy was the fourth American president to be assassinated.

Oswald, a 24-year-old former Marine, fired from the sixth floor of the Texas School Book Depository. The killer harbored Communist sympathies and had earlier defected to, then returned from, the Soviet Union.

Oswald had enlisted in the Marines in 1956. He was, like all Marines, taught how to shoot. In his final marksmanship test in December 1956, he attained the “sharpshooter” classification. After a 1959 retest he achieved the lower “marksman” rating.

He was, in other words, a skilled rifleman. Discharged from the Marines in late 1959 at the age of 19,  Oswald traveled to Russia and, after some difficulty, defected. However, he grew disenchanted with Soviet Russia and returned to the United States in 1962. In March 1963 Oswald attempted to assassinate retired major general Edwin Walker, who he believed to be a fascist, with the same rifle he would later use to kill the president.

In mid-October 1963, Oswald took a job at the Texas School Book Depository.

On the morning of Nov. 22, Kennedy arrived in Texas, intending to give a speech to launch his 1964 re-election campaign. The presidential motorcade left Love Field airport at 11:30 A.M. and at 12:28 P.M. reached Dealey Plaza.

The motorcade passed through the plaza traveling at just 11 miles per hour, as the limos’ passengers waved to the crowd. At 12:30, Oswald fired his first shot, missing the president. He quickly reloaded and fired his second just 2.3 seconds after his first.

The second round struck its target, plunging through Kennedy’s body, rupturing his trachea and a lung. This was a life-threatening wound but not a mortal one. As Kennedy leaned forward in pain, clutching his wounded throat, the third shot entered the top of his skull, exiting the right of his face. This was a mortal wound.

Also in the car was Texas governor John Connally. He was badly wounded by the same bullet that first wounded the president. Kennedy’s Secret Service detail reacted to the shots while Kennedy’s wife Jackie cradled her husband’s shattered skull in her hands. By 12:31, U.S. and world history had irrevocably changed.

The rifle Oswald wielded was an Italian Carcano Fucile di Fanteria Mod. 91/38 carbine that he had mail-ordered eight months earlier from Klein’s Sporting Goods. It cost $19.95. The Carcano was an imported war-surplus rifle. Oswald paid the extra $7 for Kleins to fit the scope. The rifle fired a round-nose copper-jacketed 6.5-by-52-millimeter round. It held six rounds.

Following the shooting, Oswald left the book depository and returned to his lodgings to change clothes.  While waiting for a bus he was confronted by Dallas police officer J.D. Tippit. Oswald fired four rounds into Tippit at close range from a mail-order Smith & Wesson Model 10 chambered in .38 caliber.

After killing Tippit, Oswald attempted to hide in the Texas Theater. But he was spotted entering without paying. He was arrested after a brief struggle.

Kennedy was rushed to Dallas’s Parkland Hospital where he was treated by staff in Trauma Room #1. Last rites were performed and he was declared dead at 1:00 P.M. His passing was announced to the public 30 minutes later. Upon Kennedy’s death, Vice President Lyndon Johnson immediately became president. Johnson was officially inaugurated aboard Air Force One two hours later.

Oswald had become a suspect in the assassination earlier that afternoon when he had been reported missing from the book depository. He was charged by police with Tippit’s murder at 7:10 P.M. and in the early hours of the next day after hours of interrogation, he was also charged with the president’s murder.

In 1964 the Warren Commission found that a deranged Oswald acted alone. Oswald never stood trial for the assassination of Kennedy or the murder of Tippit. On Nov. 24, 1963 he was shot and killed by Jack Ruby as he was led from the basement of the Dallas Police Department.

Ruby claimed his motive was to spare Jackie Kennedy the ordeal of a trial. Ruby himself was convicted of murder and died of complications from lung cancer in 1967.

Kennedy’s assassination radically altered the course of U.S. and world history and deprived America of one of its most charismatic leaders. The 1960s would see a string of political assassinations of, among others, Kennedy’s brother Robert and Martin Luther King, Jr.