The Senate's Military Budget Has the Right Idea—Will It Last in the House? 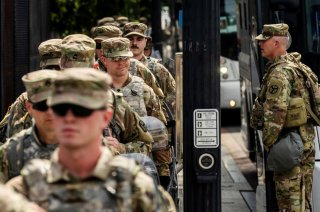 The Senate Armed Services Committee last week passed its version of the National Defense Authorization Act for fiscal year 2021. The bill passed by a wide bipartisan margin of 25-2.

It will also continue the process of rebuilding our military as documented by the Index of U.S. Military Strength.

The National Defense Authorization Act adds up to $740.5 billion of discretionary dollars, aligned with the budget caps for the last year of the Budget Control Act.

This is short of the 3% to 5% increase above inflation that Secretary of Defense Mark Esper stated was necessary in order to implement the National Defense Strategy, but given it’s an election year, it was unlikely that Congress was going to renegotiate new levels of discretionary spending.

However, the Pentagon and Congress can and should make the best out of those resources, and move forward with the implementation of the National Defense Strategy.

In a very positive development, the Senate bill creates a Pacific Deterrence Initiative that is largely aligned with The Heritage Foundation’s recent recommendation to boost military deterrence in the Indo-Pacific region.

The initiative will achieve two different goals: emphasize the factors that will allow the U.S. military to better operate in the region, and create a better way to assess the Department of Defense’s resources in the region.

The initiative is intended to focus on increasing the force posture in the Indo-Pacific in order to improve training facilities, radars, and long-range precision firing abilities.

It will also expand understanding of how much funding is dedicated to the Indo-Pacific—which currently is sorely lacking among the U.S. defense community. Right now, if you ask three defense analysts how much is being spent in the region, you will probably get five different answers.

The Senate’s proposal will establish a common baseline to start understanding and evaluating our effort in the region.

Along these lines, the bill also asks the Pentagon to widen the use of data visualization tools, so that Congress can start to have mission-specific budgetary data for the entire Department of Defense.

The European Deterrence Initiative signals the importance Congress places on working together with allies. This is particularly important as discussions emerge about removing American troops from Europe.

The bill increases the number of F-35s fighter jets to be procured by the military from 79 to 95. The F-35 is the most dominant fighter in the world, and increasing the procurement amount is a right move that will help get the Air Force closer to the number of aircraft it needs to be ready for great power competition.

The bill also requires the Air Force to have 386 operational squadrons, which war games have suggested is the right number.

The defense bill also expresses the importance of growing the Navy to 355 ships and increases the resources dedicated to building ships. This reflects the Senate’s commitment to the important goal of increasing naval capacity.

Unfortunately, the legislation prohibits an additional round of base closures in 2021, which is a missed opportunity to save resources and improve the defense infrastructure in the country.

One of the elements that Senate Armed Services Committee gets right is the time horizon.

Preparing the country for great power competition is not a one-year endeavor.

“Achieving the aims of the National Defense Strategy is a long game, and the committee takes a long view,” states the committee. “The National Defense Authorization Act [for fiscal year 2021] sets us up for success in the long term, putting our nation on an irreversible, confident, and steady course to achieve a peaceful, free, and prosperous world—not only for us, but for our children and grandchildren.”

Even amidst protest and a pandemic, the Senate Armed Services Committee was able to deliver a National Defense Authorization Act that helps improve the nation’s national defense and focus our military in great power competition.

There is still a long road before the National Defense Authorization Act becomes law, but so far the bill looks promising.

The committee was able to come together in bipartisan fashion to provide the resources needed to defend the nation in a hyper-partisan environment amid a pandemic and protests across the nation. It is a testament to how Congress can and should work.

This article by Frederico Bartels first appeared in The Daily Signal on June 16, 2020.