Sherman Firefly: The British Upgrade to a Classic American Tank 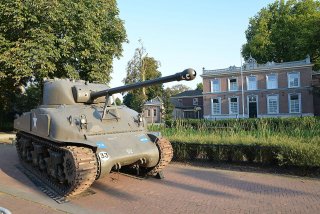 Key Point: The Firefly was a positive development for British tank crews, and despite the 17-pounder’s imperfections, it allowed the Firefly to excel as a tank hunter.

Perhaps one of the most iconic, recognizable Allied tanks of the Second World War is the American-designed M4 Sherman tank. The Sherman’s combination of decent armor protection, and adequate firepower against early-war Axis armor plus low cost and ease of manufacture meant that it was one of the most widely-produced tanks of the war.

Indeed, the Sherman was in many respects a good all-around medium tank. Its sloped front hull glacis offered good protection until German troops began to use shaped charge anti-tank weapons like the Panzerfaust and Panzerschreck. Its main gun was also initially effective against German and other early-war Axis armor. Superior late-war German armor negated the Sherman’s firepower advantage however, necessitating an even more powerful Sherman: the British Firefly tank.

The Sherman Firefly was essentially a standard M4 Sherman tank but with a longer and more powerful Ordnance QF 17-pounder main gun in place. The 17-pounder was the most powerful gun the British army mounted to a tank during the war, and was able to penetrate virtually every German tank in existence when it was introduced. An interesting Firefly explainer can be seen here and is worth the watch.

It was however quite large, and standard Shermans had to be modified to accommodate both the larger gun, and the longer ammunition it fired. One modification that the British did to their Fireflies was to eliminate the hull-mounted medium machine gun in favor of creating additional ammunition storage space. Some Fireflies even sported turret mounted rockets, originally intended for use on airplanes, as an additional offensive weapon capability, though the rockets were regarded as inaccurate.

Though the British gun did offer superior penetration when compared to the Sherman’s original gun, this came at a cost. The 17-pounder main gun produced a huge amount of backblast when fired, and could cause temporary night blindness when fired at night. Additionally, the large amount of flames the 17-pounder gun spurted out could in some instances cause underbrush to catch fire, both posing a hazard to dismounted infantry, as well as giving away the Firefly’s position.

German tank crews quickly appreciated the Firefly’s excellent anti-armor ability and would intentionally target those vehicles first. Realizing this development, some Firefly crews would try and disguise the longer 17-pounder main gun by countershading part of the barrel to make it appear shorter than it actually was. Another tactic to preserve the valuable firefly was to keep the tanks in reserve, behind standard Shermans in overwatch positions, taking them into action only once German armor had revealed itself.

Although the Firefly excelled in an anti-armor role, the British failed to supply 17-pounder-equipped tank crews with an adequate high-explosive round, leaving the tank at a disadvantage against fortified bunkers or other positions.

All in all, the Firefly was a positive development for British tank crews, and despite the 17-pounder’s imperfections, it allowed the Firefly to excel as a tank hunter.