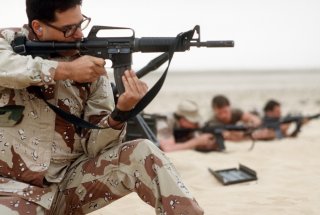 Here’s What You Need to Remember: Surprisingly, the rifle still features the three-round burst fire option. The burst cam in the rifles is notorious for making the semi-automatic trigger pull inconsistent, resulting in the Army and Marine Corps moving back to full-auto trigger groups on their AR-style rifles.

While most pilots like to think of themselves as fairly detached from the brutality of warfare on the ground, they all face the very real possibility of being shot down and forced to defend themselves on the ground. For most of the twentieth century, shot-down pilots could be expected to be captured and interned as prisoners of war, so they were generally armed with lightweight survival rifles or pistols. But more recently when combating extremist or terrorist groups, pilots who are shot down face being burned alive, or worse

Charlie Gao studied Political and Computer Science at Grinnell College and is a frequent commentator on defense and national security issues. This piece was first published in December 2019.