Should America Build a New 'NATO' in the Asia-Pacific? 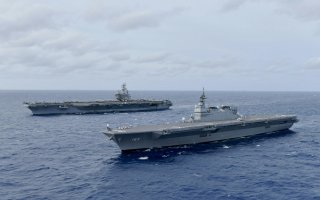 Here's What You Need to Know: A combined military force might deter China in terms of sheer numbers, not to mention coordinated air and sea operations.

What if India, Australia, Japan, and the United States formed an “Asian NATO” collective security alliance to improve prospects for stability and more effectively deter or counter Chinese operations in the Pacific theater?

It could happen and is already being explored by Pentagon leaders, diplomats, and politicians familiar with the threat conditions in Asia. Certainly, the countries are already closely aligned; B-1s are in India, Australia and Japan fly F-35s and both Australia and Japan are acquiring High Altitude Long Endurance drones from the U.S. such as the Global Hawk and Triton, to cite a few among many instances of collaboration. Other longstanding efforts include regular training opportunities, war preparations, joint weapons testing, and interoperability exercises.

When asked about the prospect of an Asian NATO, U.S. Air Force Global Strike Command Commander Gen. Timothy Ray did not say that was in his lane to decide, but he did make a point to articulate the importance of U.S.-allied collaborative security efforts in Asia, with a particular mind to deterring China.

Should these U.S.-aligned countries, perhaps with even the addition of Taiwan, draft up an agreement somewhat analogous to NATO’s well-known Article 5, an attack against any of the countries would amount to an attack upon all of them, thus the premise of alliance-generated collective security. An alliance of this kind could introduce some interesting strategic dynamics and potentially further fortify Chinese deterrence in Asia.

For instance, would the existence of an Asian NATO diminish the likelihood of provocative Chinese maneuvers in the region? Would there be less intrusive or aggressive fighter-jet operations close to Japanese shores? Fewer amphibious warfare preparation operations in the vicinity of Taiwan? Perhaps of even greater impact, would a more solidified or formalized Japan-Australia-India-U.S. alliance in any way decrease aggressive Chinese maneuvers in the South China Sea? While an Asian NATO might not necessarily mitigate continued Chinese expansionist ambitions, it could inspire a decrease in aggressive maneuvers and therefore potentially decrease the possibility of an unintended clash or exchange of fire.

Most of all, China is listed by GlobalFirepower.com as having more than 2 million active-duty military personnel, so a combined U.S., Japanese, Australian, and Indian military force might certainly help deter China in terms of sheer numbers, not to mention coordinated air and sea operations including weapons platforms, sensor targeting networking and collaborative training exercises.

For example, the U.S. and Australia have been testing hypersonic weapons together, and drone surveillance data sharing could greatly help blanket the vast ocean areas of the Pacific, Japan collaborates with the U.S. on several crucial weapons programs to include the SM-3 interceptor, and both Japan and Australia are part of the Aegis Ballistic Missile Defense Weapons System group of allies. Radar, surveillance, missile defenses, and weapons synergies with all four countries are already underway, a circumstance that has already created a military foundation upon which to build an alliance.