Should a Boeing 747 Be Armed With Cruise Missiles? 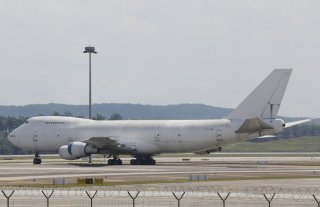 Here’s What You Need to Remember: Cheap 747s converted to carry long-range cruise missiles and shorter-range munitions alike already have the endurance needed for continent-spanning missions.

During the Cold War, Boeing developed plans to load a 747 with as many as 72 air-launched cruise missiles to serve as a long-range arsenal ship capable of wiping out targets from hundreds of miles away. The design, dubbed the 747 Cruise Missile Carrier Aircraft (CMCA), could have been an extremely cost-effective alternative to America’s current fleet of heavy-payload bombers in a wide variety of mission sets.

Ultimately, the 747 CMCA never made it off the drawing board, with the Reagan administration pulling the B-1 program out of mothballs and the B-2 entering service shortly thereafter–but it may be time the United States revisited the idea of leveraging these or similarly capable commercial airframes for more than just ferrying cargo and passengers.

Why Pack a 747 With Cruise Missiles?

On June 30, 1977, President Jimmy Carter announced that he was canceling development on America’s B-1 bomber program, citing the program’s cost overruns and advancing ballistic missile technology for the decision. The bomber would eventually find new life under the Reagan administration, eventually resulting in the B-1B Lancer that remains in service today. Northrop Grumman’s B-2 Spirit, sometimes referred to as America’s “stealth bomber,” also entered service in the ’80s, placing America’s strategic bombing capabilities right back at the top of the global military heap.

But for a short window of time, the United States seemed to be in need of a heavy-payload aircraft that had enough endurance to cross entire oceans to engage enemy targets. Some believed converting an existing commercial platform to carry the recently-developed AGM-86 air-launched cruise missiles made the most sense from an economic standpoint, and Boeing’s 747 seemed like just the right aircraft for the job.

Boeing’s 747 first took to the skies in 1969. Initially designed to compete for an Air Force cargo transport contract (which it lost to Lockheed’s C-5 Galaxy) it found renewed purpose as the first commercial airliner ever to be called a “jumbo jet,” and “jumbo” was an apt description. The 747 was a massive aircraft for its day, and the largest civilian aircraft in the world at the time. The original 747 fuselage stretched 225 feet and carried a vertical tail that stood as tall as a six-story building. It had more square footage in its wings alone than you can find in an entire basketball court, and just one of the 747’s wings was 30 times heavier than Boeing’s entire first aircraft, launched just 53 years prior.

Boeing developed the aircraft incredibly quickly–in under 16 months by their own accounting, but the effort was positively monumental nonetheless. Some 50,000 employees had a hand in the 747 program. More than 75,000 engineering drawings were produced, accounting for some six million parts and over 171 miles of wiring. In order to ensure the aircraft design was extremely efficient, it spent more than 15,000 hours in the wind tunnel, and then another 1,500 hours of flight testing.

Incredible as the aircraft was, however, it was also a serious gamble. Boeing struggled to finance the completion of its development, eventually borrowing more than $2 billion (roughly $14.9 billion in today’s money) to get it across the finish line. If the aircraft were to fail to find a market, it would have meant ruin for the company.

It may have been with that in mind that plans for the 747 CMCA began to form. Boeing knew the Air Force might be interested in an aircraft with a range of nearly 6,000 miles and the ability to carry nearly 77,000 pounds of ordnance, so they set to work on just such a proposal in 1980. If they were successful, it would mean selling their expensive new design in both commercial and military markets for cargo, personnel, and as an arsenal ship.

Boeing started with a 747-200C, which was a convertible airliner with a nose cargo door that could be opened to remove the seats and leave the interior empty, as well as to bring large payloads on board.

The 747 Cruise Missile Carrier Aircraft would leverage the new AGM-86 air-launched cruise missile, which was developed for exactly this sort of application, though in a different aircraft. By the 1970s, the B-52 was already looking pretty long in the tooth, and the AGM-86 had been designed specifically to increase its survivability by engaging targets from ranges that could exceed 1,500 miles–well outside the reach of Soviet surface-to-air missiles.

The weapons would be carried within the 747 fuselage on nine rotary launchers, each loaded with eight AGM-86 cruise missiles. The missiles would be fired one at a time from the side door near the rear of the aircraft, with each rotary launcher sliding back into firing position as needed. Although the missiles were ejected one at a time, Boeing’s design was meant to be able to launch them in quick succession.

These missiles would leverage a satellite data link to receive target information while the 747 was airborne, or target information could be relayed from a command and control team stationed just behind the cockpit of the aircraft in the area usually reserved for 1st class passengers.

As a result, the 747 CMCA would have been able to deploy more cruise missiles than three B-52s combined, each with independent targets within hundreds of miles of one another. But impressive as that may be, it was the potential cost savings that made the missile-packing 747 seem like a very viable option.

Cheaper Than Any Bomber

The B-1B Lancer that would ultimately eliminate the need for the 747 CMCA can carry a comparable payload to the 747, and its sweep-wing design and powerful General Electric F101-GE-102 afterburning turbofan engines make it both fast and extremely maneuverable for a bomber carrying so much firepower you can use school busses as a unit of measurement. But it’s also incredibly expensive, at around $61,000 per hour to fly. The B-52 is a bit pricier, at about $70,000 per hour. The stealth B-2 Spirit crushes those figures with a jaw-dropping $130,159 per hour.

A large part of what makes America’s bombers so pricey to operate is the size of their respective fleets. The Air Force operates some 62 B-1Bs, 76 B-52s, and just 20 B-2s. With so few of each of these planes in existence, parts tend to be very pricey–and they keep getting pricier as all three of these bombers continue to age. Conversely, more than 1,500 747s have been built, with supply lines and maintenance infrastructure already established the world over. That means it’s not just cheaper to buy parts for the 747, it’s cheaper to get them on the aircraft that need them.

As Tyler Rogoway pointed out way back in 2014, a 747 carrying 72 cruise missiles would have been extremely handy over Afghanistan throughout the past 20 years of conflict. With its low operating cost, great endurance, and massive payload, the 747 CMCA could have been an air support powerhouse in the uncontested airspace over Afghanistan, as well as in other conflict-ridden areas like Iraq and Syria. If the aircraft had been put into service and converted to carry JDAMs of varying sizes along with small-diameter bombs over the years, the number of individual targets it could engage increases from 72 to literally hundreds. And all at a fraction of the cost of America’s current bomber options.

Could We See a Resurgence of the CMCA Concept?

Today, both the B-1B Lancer and the B-2 Spirit are slated to retire in favor of America’s forthcoming stealth bomber, the B-21 Raider. The B-21 promises to offer incredibly advanced stealth technology and the same global strike capabilities we’ve come to expect from bombers like the Raider’s predecessor, the B-2. There is a significant catch, however: The B-21 Raider is going to be quite a bit smaller than the B-2, limiting its payload capabilities to around 30,000 pounds. That’s not terribly far off from the B-2’s 40,000-pound limit, but it’s less than half of the supersonic B-1B’s 75,000 capacity.

While the B-21 will likely be more economical than the B-2 thanks to newer technology and fresher airframes, there’s no denying that operating stealth aircraft is expensive. This understanding is part of what prompted the Air Force to purchase new non-stealth F-15EXs, which offer nearly three times the lifespan at less than half the cost per operating hour than the F-35 Joint Strike Fighter. While Northrop and the Air Force both claim the B-21 program is steaming ahead on schedule and without any serious snags, just how much it costs to fly remains to be seen.

The United States is no longer conducting combat operations in Afghanistan and Iraq, but as the nation shifts back toward an era of great power competition, it seems unlikely that America’s days of conducting combat operations in uncontested airspace are over. Much like the last Cold War, the simmering tensions between the U.S. and China are unlikely to boil over into open war any time soon. This time, it’s not just mutually assured nuclear destruction keeping the dogs of war at bay, it’s also the promise of economic catastrophe.