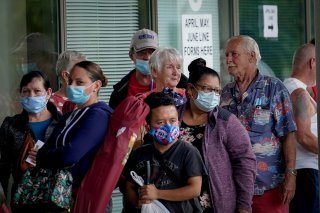 My colleague Kyle Pomerleau rightly noted it’s a feature not a bug that unemployment benefits are subject to federal income taxes, as they generally have been since the 1986 tax reform law. About that change in the treatment of unemployment compensation (UC), the nonpartisan Congressional Research Service notes: “The rationale for full taxation of UC benefits was to treat UC benefits the same as wages and to eliminate the work disincentive caused by favorable tax treatment for UC benefits relative to wages.” That makes particular sense when benefit recipients collected more than they earned from working, as occurred widely in 2020 for the first time. But while taxing benefits makes policy sense, three powerful factors will press policymakers to instead reduce taxes on benefits in the weeks ahead.

Nineteen million were still collecting benefits in mid-December. Surging coronavirus cases, renewed lockdowns, and expanded unemployment benefits stretching into 2021 mean many will remain on benefits in the coming months, even as they discover they owe significant taxes on the benefits they collected in 2020. As a recent survey by Jackson Hewitt Tax Service found, “38% of Americans receiving benefits were unaware that the money was taxable – and nearly two-thirds of those individuals had not set aside or withheld money from the payment for their 2020 income taxes.” Lawmakers will hear their pleas just as they consider next legislative steps on temporary benefits slated to phase out in mid-March.

(2) Administrative burdens on agencies struggling to pay unemployment benefits. State unemployment benefit agencies continue to struggle with making timely payments due to near-record demand for benefits. The same agencies now are also prepping to send out millions of 1099G forms reminding Americans of the unemployment benefits they were paid in 2020. As the California Employment Development Department (EDD) announced last week, “EDD estimates it will issue 7.8 million Form 1099Gs for claimants who collected benefits.” That’s a large added administrative burden now, which will be compounded by a surge in frustrated calls as well as formal disputes for agencies to process in the months ahead. None of that will make their core responsibility of efficiently paying benefits any easier.

(3) Significant fraud means many will be billed for benefits they never collected. Some of the continued elevated demand for benefits reflects widespread fraud involving literally millions of claims. For some 1099G recipients, the forms will come as a particular shock — since they never filed a claim or collected benefits in the first place. In cases of impostor fraud, as the IRS describes, “fraudulent claims are made to the identity thieves, and the unrelated individuals whose names and personal information were stolen did not receive any of the payments.” Examples of identity theft victims told they owe taxes on benefits they never collected will fuel calls for suspending taxes on benefits altogether.

During the Great Recession, the first $2,400 in unemployment benefits paid in 2009 was excluded from federal income taxes, in a move designed to focus temporary tax relief on low-income individuals. Prior to that policy’s inclusion in Democrats’ 2009 stimulus law, suspending taxes on benefits was often regarded as a Republican policy, albeit one generally supported by small numbers of party moderates.

Policymakers may react very differently today, when lower-income workers have been hardest hit by layoffs but federal bonuses significantly elevated benefits paid to all recipients — and also the taxes many now find they owe. For example, the average recipient laid off in April who remained unemployed through December collected 26 weeks of state benefits averaging $319 ($8,294), 17 weeks of $600 federal bonuses ($10,200), six weeks of $300 federal supplements ($1,800), and finally 13 weeks of federal extended benefits averaging $319 ($4,147). That’s over $24,000 in benefits, or roughly ten times the $2,400 excluded from federal income taxes in 2009. Millions in higher-benefit states like California, Massachusetts, New York, and New Jersey collected even more, and will face even bigger federal tax bills. As a result, Congress will soon come under tremendous pressure to revive its prior policy of temporarily reducing — and perhaps even eliminating — federal taxes on unemployment benefits.