Should Healthcare Workers Be Regularly Tested for Coronavirus? 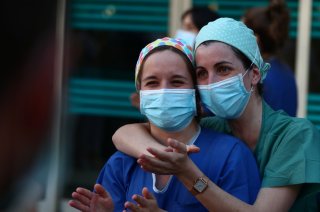 As we move into the next phase of the coronavirus pandemic, we urgently need to restart usual clinical activities such as cancer treatment and routine surgery. But to do this safely, we need to minimise the transmission of COVID-19 in healthcare settings.

To this end, the UK Department of Health and Social Care said on April 4 that it would be testing critical key workers regularly once widespread testing became available. And in a letter dated April 29, NHS England confirmed that it would be extending regular testing to asymptomatic staff.

To date, however, there has been no systematic implementation of this policy. So what does this mean? Should we or should we not be testing all frontline staff?

In the UK, blanket testing of healthcare workers for infections is a concept that we’ve moved away from over the last two decades. It’s now recognised that the best way to ensure patient safety is by strictly enforcing “universal precautions” for infection control – that means, we apply the same, safest possible measures for everyone.

For example, we don’t usually screen staff for MRSA anymore, partly because in an environment where staff may be constantly exposed, a negative test at a point in time can be falsely reassuring. Instead, we make sure that everyone follows hygiene practices that minimise the chance of spread, only testing when there are specific circumstances requiring investigation.

Still, we should also recognise that the coronavirus pandemic is a completely new and very specific situation in which we are tearing up many rulebooks. There is certainly a debate to be had around regular testing of healthcare workers. So, let’s take a look at the screening of asymptomatic staff for COVID-19, the likely benefits and the evidence that might support it.

We know that some people with COVID-19 have no symptoms and that for people who do develop symptoms, transmission can occur in the day or two before they appear. Both scenarios are potential impediments to hospital infection control.

Unfortunately, in infected people the detection rate of tests is lower in the pre-symptomatic phase than once symptoms appear. Even in cases with symptoms, the reported ability of tests to detect cases varies widely. So a negative test result certainly cannot exclude infection.

Still, picking up some pre-symptomatic cases would be better than picking up none at all. So if we had a regular testing strategy to detect these, the next question is how often should we test?

If we tested weekly, a person might still enter the pre-symptomatic phase and become positive on any of the next six days before their next test. So now not only do we have a lower test detection rate than we would like, we also have a big gap between tests and do not know whether we are testing at the right time.

A way around this, in theory, could be to test all healthcare workers daily, but currently this is unlikely to be achievable.

Evidence that testing would be useful

The Imperial College London COVID-19 response team has modelled a regular testing approach. It suggests that screening staff weekly might reduce their contribution to transmission by 25%-33% on top of other measures, such as health workers self-isolating if they develop symptoms. This model makes the assumption that testing could detect 90% of cases from three to 21 days after infection – a very big assumption indeed.

Meanwhile, a real-life study at St Bartholomew’s Hospital, London, found that at the height of COVID-19 in the community at the end of March, around 7% of asymptomatic healthcare workers tested positive, falling to around 1% by the end of April. The authors concluded that “as the overall epidemic wave recedes, asymptomatic infection among healthcare workers is low and unlikely to be a major source of transmission”. Nevertheless, we do still need to consider all reasonable methods to reduce risk for the most vulnerable categories of patients.

We shouldn’t forget that universal precautions exist for preventing the spread of respiratory diseases, and that the NHS already manages patients at very high risk of infection, such as bone-marrow transplant patients. But managing such risks is a highly complex undertaking which can’t be reduced to “testing” soundbites.

In the rush to employ an inherently imperfect testing regimen, the important role of respiratory personal protective equipment (PPE) – protecting both the wearer and the patient – respiratory hygiene, adequate staffing levels and many other measures drawing on our established principles of universal precautions must not be overlooked. Similarly, staff must be provided with space to appropriately socially distance, including in changing facilities and break areas.

It may still be that regular testing of healthcare workers is considered justified on the grounds that it will prevent some transmissions. But unless people understand its limitations, there is a danger it could lead to a false sense of security. It is certainly not the panacea some would have us believe.