Should India Hitch Its Wagon to the U.S.? 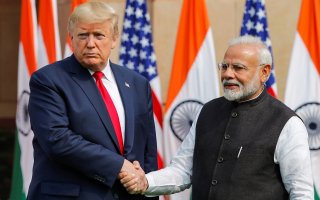 In the wake of the military face-off at Ladakh on the India–China Line of Actual Control (LAC) that led to the death of 20 Indian soldiers on 15 June, there’s been much talk in India about hitching India’s wagon to the US. Many commentators have argued that New Delhi should cooperate more vigorously and openly with Washington in the latter’s strategy to contain the growth of Beijing’s power and influence in the Indo-Pacific region.

This sentiment builds on India–US security cooperation both bilaterally and as part of the Quad, whose other members are Australia and Japan. All four share complementary interests vis-à-vis China, especially checkmating its growing intrusion in the South China Sea and restraining its reach through the Belt and Road Initiative. Japan and India have long-standing territorial disputes with China that they attribute to Beijing’s expansionist policy.

Advocates of closer India–US strategic cooperation against China base their arguments largely on recent statements by US President Donald Trump and Secretary of State Mike Pompeo lambasting China’s aggressive policy, especially with regard to its moves in Ladakh. Pompeo accused China of taking ‘incredibly aggressive actions’ on the LAC and went on to say that ‘Beijing has a pattern of instigating territorial disputes [with its neighbours]. The world shouldn’t allow this bullying.’ Trump also declared that China’s aggressive stance along the India–China border fitted with a larger pattern of Chinese aggression in other parts of the world. ‘These actions only confirm the true nature of the Chinese Communist Party.’

While it is true that India–US relations have been on a remarkably upward swing in the last two decades in the economic as well as strategic (including nuclear) arenas, too much euphoria on this score could have negative fallout for India as well. The downsides include New Delhi becoming highly susceptible to Washington’s inducements to participate in the looming global confrontation with China that is widely predicted by strategic analysts, especially in the US.

India must remain wary of getting sucked into the new ‘cold war’ pitting the US against China. If New Delhi allows its territorial disputes with Beijing to become part of this global confrontation, it could lose any residual strategic autonomy it possesses and surrender its foreign policy to the whims and fancies of Washington. That mindset could easily lead to military overstretch on the assumption that the US would bail India out if matters escalated further on the LAC.

Such an assumption has the potential to cause an Indian military debacle in the Himalayas, where the Chinese hold the high ground and have over decades built accessible roads to the LAC for future military operations. While Indian road building has accelerated in the past few years, India still can’t match China’s preparedness on that score. And while India’s military preparedness today is far greater than it was in 1962, New Delhi can’t risk a major armed confrontation with China on the Himalayan front as it could have unforeseen consequences.

Disengagement and de-escalation on the India–China border would be bitter pills to swallow in the wake of Chinese intrusions but that would be far more prudent for India than taking a hard line based on an assumption about US assistance. Given that the US is already overstretched globally and the Trump administration is committed to military retrenchment from Germany to Afghanistan, any notion of American military support on the Himalayan front is a pipe dream. Public opinion in the US and the administration’s own predispositions would not permit it. And without a NATO Article 5–like commitment to come to India’s aid militarily if required, a tight American embrace won’t serve much purpose as far as New Delhi’s confrontation with China is concerned.

It would also affect India’s relations with Russia, which continues to be the principal supplier of sophisticated weaponry and the major source of spare parts for equipment in use by all branches of the Indian armed forces. While US threats to sanction India for buying Russian S-400 anti-missile systems have receded into the background for the moment, increased and overt dependence on the US to counter China would encourage Washington to tighten the screws on India again as part of its attempt to thwart the sale of sophisticated Russian weapons internationally.

Finally, India is heavily dependent on trade with China in key areas. It is estimated that in 2018–19, 92% of Indian computers, 82% of TVs, 80% of optical fibres and 85% of motorcycle components were imported from China. Even with the best of intentions, it would take India years to wean itself away from China in these and other important sectors. In the interim, India can’t afford to be seen as too closely allied with the US in the latter’s global rivalry with China because that could seriously disrupt the supply chain in these sectors. In addition, although India’s pharmaceutical industry is the third largest in the world in terms of volume, it imports two-thirds of bulk drugs or drug intermediates from China to keep the industry in operation.

India will have to tread very cautiously in aligning itself with the US to contain China. New Delhi must not rush into Washington’s embrace without carefully weighing the pros and cons of such a policy.