Should People Who Have Had COVID Go To the Back of the Vaccine Line? 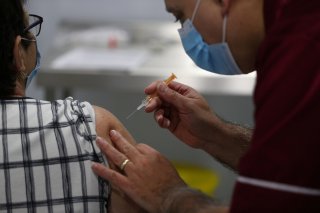 A recent report from Public Health England showed that 83% of people who had had COVID were protected from reinfection five months later. Given that 3.7 million people in the UK have had COVID, should those with antibodies be at the back of the vaccine queue?

With the current high death rate, rising case numbers, closed schools and a seemingly interminable lockdown, it is natural to look for ways to speed up the vaccination rollout. Surely those who have already had COVID and recovered can be deprioritised so that people shielding at home can receive the vaccine sooner?

Certainly, the government is not afraid of hacking the process to increase short-term vaccine coverage. The recent example of lengthening the wait for a second dose proves that. But how feasible and effective would it be to not vaccinate people who have had the virus?

First, how sure are we that those people recovered remain protected five months later? While there is no doubt that the antibodies that helped you recover from COVID will last for some time after your illness, hopefully reducing the chance of reinfection, this study was on recovered healthcare professionals, looking at whether they went on to catch COVID again.

Despite the rising case number, a lot improved in those five months, particularly in the availability of protective equipment for healthcare workers and the isolation of COVID patients in hospital. This complicates checking healthcare worker’s antibody-derived protection rates and the calculation for how long you may remain protected.

But can’t we just check the antibodies at the test centres, sending those home that don’t need their immune system trained in COVID-focused jiu-jitsu? We can definitely test for antibodies. The test has been available – with a few stop-starts – for some time, but critically it relies on a blood test.

England’s test-and-trace programme, which has struggled to process swab tests on the scale needed to match case numbers, would surely collapse at the request to process antibody tests for the entire UK population. Shipping, extraction, processing, testing … all while poor Mrs Jones sits in a school hall with a nurse poised with a vaccine jab waiting for the green light.

How about using the test-and-trace data to sort those that need the jab from those that don’t?

While I will overlook that use of “don’t” (antibodies are not everlasting, even if you have had COVID) the real question here is how much do you trust the accuracy of test and trace, and of people’s ability to self-declare accurately? At the start of the pandemic everyone I spoke with had “had that COVID” despite being untested and unable to identify any exposure other than “I went on a train”.

This improved with mass swab-testing, but accuracy, particularly false positives, would be an issue if used to exclude vulnerable people from the vaccine queue.

Like many things related to this pandemic, a good idea is complicated by the detail. Vaccine deployment could be targeted more precisely if we knew how long each of us retained antibodies and had an instant test capable of estimating how much and for how long we would be protected. Given that we have neither – and the NHS is under immense pressure already – the approach of vaccinating in demographic groups currently appears to be our only option.