Should Russia’s Navy Give Up on Having an Aircraft Carrier? 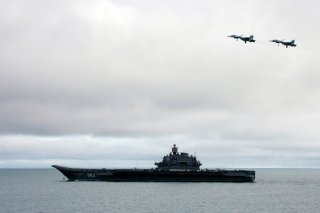 Here's What You Need to Remember: Before October 2018, Moscow planned on extending the service lives of its carrier and other warships from the 1980s in order to complement the newer vessels. For long-range deployments across the Atlantic or to war zones such as Syria, Russia tended to send Kuznetsov and equally aged, Soviet-built destroyer and cruisers.