Should You Be Terrified Of Iran's Deadly Missiles? 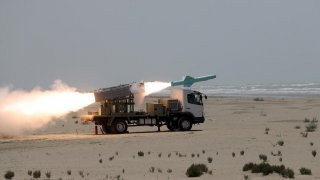 Here's What You Need To Remember: U.S. intelligence is keeping a close eye on Iran's arsenal, the largest in the Middle East.

The U.S. Defense Intelligence Agency (DIA) released a landmark report last year analyzing the capabilities of Iran’s military. In light of Iran’s September attacks on the Abqaiq and Khurais oil facilities in eastern Saudi Arabia, the report’s emphasis on Tehran’s expanding cruise missile capabilities has already proven to be prescient.

Image: An Iranian locally made cruise missile is fired during war games in the northern Indian Ocean and near the entrance to the Gulf, Iran, June 17, 2020. Picture taken June 17, 2020. WANA (West Asia News Agency) via REUTERS.