Shunned By the Army: Why the M9A3 Pistol Was Rejected 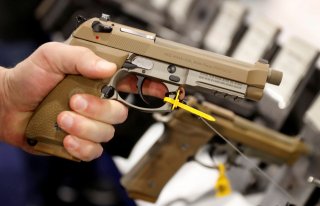 Here’s What You Need to Remember: In 1985, the U.S. Army made an abrupt shift, aging fleet of World War II-era handguns for a foreign model. The Italian-made Beretta M92 was classified the M9 handgun and served with the U.S. Armed Forces for more than thirty years. The U.S. Army recently chose a new handgun, the M17 Modular Handgun System, and excluded a new, updated M9A3 from the competition. Although the proposed M9A3 failed to gain traction, it is still available on the civilian market and its improvements, adopted by Beretta for the twenty-first-century battlefield, are worth examining.

The M9A3 Beretta looks like a futuristic, high-tech version of its Reagan-era ancestor—which of course it is. The A3 is finished in a three-tone black, coyote, and flat dark earth scheme, unlike the flat black of the M9, a bit of marketing that reflects the type of environment U.S. forces have been fighting in for the last seventeen years. It has harder lines than the original Beretta, with a flattened mainspring housing eliminating the bulge along the backstrap, creating a more angular grip reminiscent of the M1911A1.

The Beretta is largely unchanged underneath the hood. The A3 is still a hammer-fired single-action/double-action handgun, with an initial long double-action trigger pull for the first shot the Army preferred for infrequent shooters. Subsequent shots are single action. One major change: the safety lever can act as a safety-decocker mode, or just a decocker mode depending on how the user wants it. This allows the shooter to lower the hammer without discharging the weapon.

The A3’s barrel is still partially visible along the top of the frame, and barrel has been increased slightly, to five inches. The barrel tip is threaded for use with a suppressor, and in the absence of a suppressor, a knurled knob can be screwed on to protect the barrel threads. The A3 also features tritium sights for low light shooting and a three-point Picatinny rail underneath the barrel for aiming lasers and flashlights.

The Beretta M9A3’s magazine has been increased to hold seventeen rounds of nine-millimeter ammunition instead of the original fifteen, placing the newly redesigned handgun up there with the Glock 17 in terms of ammo capacity. However, the wide, double-stack magazine that makes a seventeen-round magazine possible put it at odds with the Modular Handgun System’s goal of a pistol that could fit different hand sizes and types. In order to reduce grip width and accommodate smaller hands, the Beretta comes stock with Vertec-style thin grips, and alternately wraparound grips for larger hands. The result is a very reasonable 1.3-inch grip width.