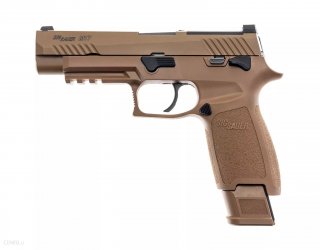 Here's What You Need To Remember: Clocking in at an overall length of 7.2 inches and a loaded weight of 28.1 ounces, the M18 is poised to distinguish itself as a solid concealed carry solution for consumers seeking portability and friendly ergonomics without excessive compromises in performance.

A civilian version of the popular Sig Sauer P320-M18 handgun, adopted by large swathes of the U.S. military in 2019, has come to consumer markets following a groundswell of popular demand.

Sig Sauer’s Chief Marketing Officer and Executive Vice President, Commercial Sales, Tom Taylor, made the following announcement in a press statement issued last month: “Since the official selection of the M17 and M18 by the US Army for the Modular Handgun System (MHS), we’ve seen significant civilian interest to own both variants of the handguns. The P320-based M17 and M18 are among the most tested handguns in history and the pair has been proven to be unmatched in both accuracy and reliability.”

Civilian versions of firearms have been known to diverge from the design of their military counterparts to comply with a wide array of legal constraints, but Sig Sauer’s marketing insists that this is not the case with the M18: “we are very proud that with the P320-M18, civilians can now own the same innovation and versatility that has made either the M17 and M18 the handgun of choice for all branches of the US Military.”

Indeed, the P320-M18 looks to be a carbon copy of its military counterpart. The M18 is a striker-fired 9mm pistol, featuring a tan, PVD-coated stainless steel slide sitting on a beige-toned polymer frame-- the same finish as the military version. Occupying the $600 price bracket, the M18 ships with Sig Sauer’s SIGLITE front night sights and removable night sight rear plate, as well as several 17 and 21-round magazines. The slide is designed for seamless compatibility with SIG’s ROMEO1PRO, a premium red dot pistol sight, while frontal and rear serrations along both sides of the slide provide an additional grippable surface for reliable operation. The only apparent difference between the civilian and military versions of the M18 is that the former boasts black controls, as opposed to the tan-colored controls of the latter.

The M17 and M18 are advanced variants of SIG’s popular P320 platform, featuring a redesigned slide, loaded chamber indicator, more durable trigger, anti-corrosion coating, and ambidextrous manual safety. These improvements come at something of a design tradeoff: M17 and M18-style P320 pistols are only compatible with 9mm rounds, whereas the baseline P320 can additionally be converted for compatibility with the .40 S&W and .357 SIG calibers.

Described by Sig Sauer as “among the most tested handguns in history” that have “been proven to be unmatched in both accuracy and reliability,” the M17 and M18 will make their way to branches of the US military after winning the Modular Handgun System (MHS) competition to replace the ageing Beretta M9. The full-size M17 will be phased in as the US Army’s primary service pistol, while the compact M18 will be procured for officer and other specialized roles. Meanwhile, the Marine Corps is set to adopt the M18 as its standard-issue firearm, while the Air Force and Navy plan to purchase 130,000 and 60,000 M18’s respectively.

Clocking in at an overall length of 7.2 inches and a loaded weight of 28.1 ounces, the M18 is poised to distinguish itself as a solid concealed carry solution for consumers seeking portability and friendly ergonomics without excessive compromises in performance.