The "Silent Epidemic": Dementia Is Truly a Terrifying Disease 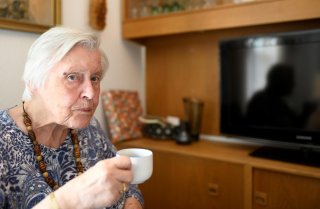 Dementia used to be called “the silent epidemic”, but it is no longer silent. It has become the subject of seemingly endless discussion, for example with 12 stories on dementia or a cure for it in one UK newspaper in one week alone. A succession of surveys by Saga have shown that we are more frightened of developing dementia in old age than any other condition including cancer, and the language we use to talk about it: “raw horror” and “living death” speak volumes of the deep unease the prospect of dementia stirs.

There can be no doubt that it is frequently a terrible condition both for the patient and those close to them, robbing everyone of peace, dignity, enjoyment and hope, and crushing the spirits of carers over months or years of struggle. But the hold which the prospect of dementia has on our collective imagination may be rooted in something more fundamental than our fear of disease – it challenges our deepest cultural assumptions. We live in a “hypercognitive” society, as the medical ethicist Stephen Post termed it, in which rational thought and coherent memory are core values. If the measure of our humanity is “I think, therefore I am”, what is the human status of someone whose ability to think is impaired?

Further reflection yields other ways in which a person with dementia doesn’t fit our understanding of what a person should be. For example, rhetoric of political and civil rights (and ultimately the heart of our legal system) hangs on the notion of autonomous individuals acting with intent, each with a coherent sense of their own preferences and freedoms. The activity of citizens as shrewd producers and (more importantly) consumers of high-value physical and cultural products is the foundation upon which economics and industry is built. Finally, the perceived social value, and to some degree economic value, of any individual is closely linked to their willingness and ability to keep pace with a highly complex and rapidly-changing society.

If the sort of human being that we recognise and value is somebody who thinks clearly, remembers accurately, consumes consistently and adapts speedily, then it is clear that a person with a diagnosis of dementia faces the prospect of a sort of social and cultural death, in addition to the privations and suffering from the condition itself.

This is a very good reason why we should be afraid of a diagnosis of dementia, whether for ourself or for someone close to us. It is an aspect of what Tom Kitwood, a pioneering researcher in the field of dementia care, memorably termed “malignant social psychology”: the set of assumptions and social climate that can erode the identity and agency of a person with dementia.

In order to reduce this sense of fear, society has invested heavily in the search for a cure for dementia, or at least a treatment to reduce the rate of cognitive loss and attendant symptoms. This is of course a very important project which may have a huge impact on alleviating the suffering of people with dementia and those close to them. But it is a long-term project, with uncertain outcomes. In the meantime, we can examine the causes and search for a “cure” for the social and cultural death that can afflict both people with dementia and their carers. This will entail calling into question some of the key principles on which contemporary Western society is constructed.

Dementia forces us to choose. Confronted with someone who can no longer think or remember clearly, who cannot conceptualise a range of options or contribute to the productivity of material society, we are forced to decide whether we will accept them as a person or not. And if we do, we must accept that we have been working with a narrow, impoverished and functionalist view of personhood that privileges the rights and interests of thinking, choosing consumers while marginalising people with dementia and other diseases like it. It is from this perspective that a person with dementia can only be understood as a “burden” on society.

The answer is not to propose that people with dementia should opt for euthanasia, as Baroness Warnock notoriously suggested, but to change our understanding of what society is, and how different people contribute to it.

It may require us, collectively, to revalue the role of intuition, metaphor and the arts in keeping us human. In rethinking the role of commerce and the consumer as we approach a time of “peak stuff”. In reconsidering the role of “collective memory” that can keep both individuals and whole societies in touch with human values. And in learning to slow down in the face of a drive for superficial and target-driven efficiency.