This Simulation Shows a Second Korean War Would Be Hell 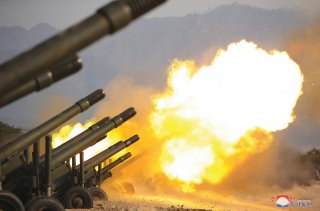 The game designer must take a lot of information and make abstractions and comparisons about nearly everything, using whatever data points he can find. The F-16 fighter has a long combat record, allowing for pretty accurate modeling. But the fighting ability of the North Korean 105th Armored Division, which hasn’t seen battle since 1953, is purely a matter of conjecture.

They usually exaggerate the most important terrain features, such as rivers, bridges, mountains, roads, railroads and cities. Maps with inflated features are easier to read and can help you make more informed decisions. For example, a river might be a thin blue line on a regular map, but that thin line could be utterly impassable to regular infantry or even tanks.

Which is Next War: Korea? Hopefully, we’ll never know for sure.