Smaller Aircraft Carriers: Is There Any Point? 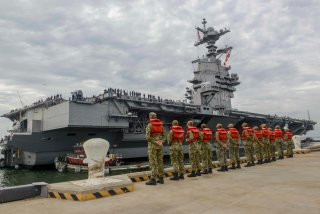 Here's What You Need to Remember: Carriers that have fewer capabilities would affect how the U.S. wages war, such as relying on carrier-based air support when operating far from U.S. airfields and land-based aircraft.

The Navy can buy smaller, cheaper carriers rather than the $13 billion Ford-class behemoths it is currently constructing, according to a new study by RAND Corporation. But smaller and cheaper means reduced capabilities and could prevent the Navy from fighting in hostile waters or providing the air support for ground operations.

- The CVN-8X: A slightly stripped-down version of the 100,000-ton Ford-class carriers. It would be powered by forty-year nuclear reactors that couldn't be replaced, rather than the current twenty-five-year reactors on the Fords that can be replaced to extend the life of the ship. It would also be equipped with three rather than four catapults.

- The CVN LX: A 70,000-ton carrier closer to the old Forrestal-class ships of the 1950s, the Navy's first “supercarriers.” They would be propelled by hybrid nuclear-conventional engines, with one reactor instead of the two on the Nimitz- and Ford-class ships. It could still carry a large air wing and would still be more capable than the Nimitz carriers, but it would be slower and less survivable than the Fords, nor could its air wing generate as many sorties.

In turn, carriers that have fewer capabilities would affect how the U.S. wages war, such as relying on carrier-based air support when operating far from U.S. airfields and land-based aircraft. “It’s true that getting what’s in the Ford-class capability requires Ford-class investment,” Brad Martin, a retired Navy captain and one of the RAND researchers who wrote the study, told TNI. “The alternatives are offered as less costly, but we are clear that there is diminishment in capability that Navy would need to evaluate. Some losses of capability might not be critical—a lower sortie generation rate for example—but others might be much more so.”

Opting for either of the large nuclear carriers described by RAND probably wouldn't result in too drastic a change for the Navy. Not so for the two smaller, conventionally-powered carriers. “The conventionally-powered alternatives we looked at—the two smallest variants—would, if selected as replacements for the Nimitz class as these ships reach service life, significantly impact Navy operational concepts,” Martin said. “This is primarily because they lack the ability to support an integrated air wing. They could generate some portion of the strike and defensive counter-air sorties required in campaign plans, but they would have to rely on some off-ship alternative for other capabilities (airborne early warning and C2 in particular) now provided organically.”