Smith & Wesson’s Model 29 is Not For Everyone, But Boy is It Powerful 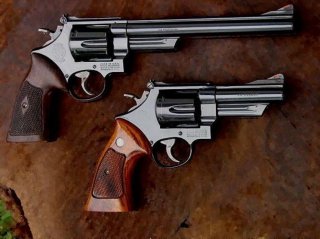 Here's What You Need to Remember: A handgun’s weight is typically a double-edged sword: while a lighter handgun is typically more comfortable to carry, a heavier handgun absorbs recoil better, sparing the user much of the ensuing kick. This is particularly true in heavier caliber revolvers.

One of America’s oldest gun companies has pushed the limits of technological innovation to create the lightest large-caliber revolver on the U.S. market. The Smith & Wesson Model 329PD takes technology the company pioneered for smaller revolvers and ports it to large frame, large caliber revolvers. The result is perhaps the lightest .44 Magnum revolver ever made.

The .44 Magnum cartridge was invented in the late 1940s and introduced in 1950. The big round was based on the .44 Special and featured a significant boost in energy and velocity. The .44 Magnum delivered 767 foot-pounds of energy at the muzzle, and at 1,200 feet per second easily broke the supersonic barrier.

One of the first—if not the first—handgun to take advantage of the new cartridge was the Smith & Wesson Model 29. The result was a handgun not only useful for dealing lethal effects against large, dangerous game, it achieved fame as the “Dirty Harry” gun. The Model 29 is not a light firearm, however, weighting 2.69 pounds unloaded and three pounds loaded. This was a pronounced downside for hunters pursuing big game in the backcountry, who were already carrying a large caliber rifle and various equipment.

In the early 2000s, Smith & Wesson enhanced their line of snubnose, or “J-frame” revolvers with a new metal technology called scandium. A rare-earth metal, adding small quantities of scandium to aluminum greatly improved aluminum’s tensile strength. Less than one percent of the weight of the aluminum used in a product is necessary to give the alloy improved strength, so scandium aluminum alloy is virtually the same weight as untreated aluminum. Scandium was used in considerable quantities in early versions of the MiG-29 fighter jet, allowing for a lighter fighter with a higher thrust to weight ratio.

In addition to lightweight, a scandium-aluminum alloy is also corrosion-resistant and has “exceptional high fatigue properties approaching titanium”—all features that would be very useful in a metal handgun. A revolver made of scandium instead of steel was therefore significantly lighter, a desirable feature in a small backup or pocket pistol. Smith & Wesson brought this technology to market with the Model 340PD. The 340PD had a scandium frame and a titanium cylinder, the latter necessary for resisting high chamber pressures.

The result was a dramatic loss in revolver weight. The Smith & Wesson 640, an all-steel J frame hammerless revolver with two-inch barrel, weighs 22.1 ounces. The very similar 340PD, built with scandium and titanium, weighs just 11.8 ounces. The 340PD is significantly more expensive, but a fifty percent reduction in carry weight is an extremely attractive feature for those that carry handguns concealed.

The Model 329PD quickly followed the scandium J-frame revolvers, bringing lightweight metals to the large, “N-frame” revolver family. The 329PD, like the 340PD, features a scandium aluminum frame finished in matte black and titanium cylinder. The 4.1-inch barrel is made of stainless steel for accuracy and long life. The 329PD weighs just 25.2 ounces. The all-steel Model 29, by comparison, weighs 43.8, a savings of more than a pound.

The 329PD is in other respects identical to other Smith & Wesson revolvers. It is a single action/double-action revolver, is approximately the same length as steel revolvers, and comes with both wood and synthetic grips. Tacking on the technology, however, Smith & Wesson provides the 329PD with HI-VIZ fiber optic sights. Like other .44 Magnum revolvers, the pistol can fire both the powerful .44 Magnum round and the weaker .44 Special round.

A handgun’s weight is typically a double-edged sword: while a lighter handgun is typically more comfortable to carry, a heavier handgun absorbs recoil better, sparing the user much of the ensuing kick. This is particularly true in heavier caliber revolvers. The 329PD is an exceptionally light heavy-caliber .44 Magnum revolver. According to reviewer Jeff Quinn, “.44 Special loads were all very comfortable to shoot in the 329PD for extended range sessions, but most of the .44 Magnum loads were brutal after a few shots.”

The Smith & Wesson 329PD is not a handgun for everyone—but then again, neither is the .44 Magnum caliber. The combination of the two should appeal to shooters with a specific set of requirements, namely an easy to carry large caliber revolver that ideally won’t be fired more than a few times in a row with Magnum cartridges.

Kyle Mizokami is a defense and national security writer based in San Francisco who has appeared in the Diplomat, Foreign Policy, War is Boring and the Daily Beast. In 2009 he cofounded the defense and security blog Japan Security Watch. You can follow him on Twitter: @KyleMizokami. This article first appeared two years ago.