Soldiers are Always Carrying Condoms, and No Not For That 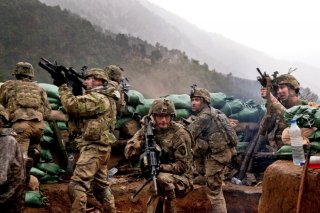 The humble condom — a U.S. soldier’s companion for a hot night out on leave since the military began issuing them in the 1930s as a barrier against infection. But for decades many soldiers, sailors, airmen and Marines often used condoms as field-expedient fixes when other solutions weren’t found in the manual.

A rubber is elastic, waterproof, comes in a handy packet and doesn’t usually break – qualities that make it perfect for all kinds of non-regulation uses.

For example, during World War II some G.I.s placed condoms on the muzzles of their weapons. “Condoms will certainly cover the muzzles, and G.I.s were definitely issued condoms for other purposes, so there is no reason that they could not have been used to protect their ‘other weapons,’” said Alan Archambault, former supervisory curator for the U.S. Army Center of Military History.

The idea wasn’t to keep out water. One good dunking would flood any firearm – but the water usually would drain out, particularly from weapons designed to fire with an open bolt.

However, a barrel clogged with mud, grit, sand or some other foreign material could be disastrous. Firing a weapon in that condition could cause the barrel to explode, severely injuring or killing the soldier.

Slapping a piece of tape on the business end of a rifle was one recommended way of keeping the gunk out. But a soldier or Marine might not have any tape handy, whereas the military made sure every fighting man had his “prophylactic kit” containing a condom.

Archambault, a retired U.S. Army officer, said that “while using condoms on weapons was a good story and has a basis in fact, it was not as widespread as Hollywood portrays it.” However, there is historical evidence that the practice endured as late as the Vietnam War.

According James F. Dunnigan and Albert A. Nofi in their book Dirty Little Secrets of the Vietnam War: Military Information You’re Not Supposed To Know, American fighting men in the brush of Vietnam were sliding condoms onto their M-16s throughout the war.

They might not have stayed on as securely as a piece of tape, but a condom made sure the rifle was ready for instant use while slogging through the muck of Southeast Asia. Dunnigan and Nofi note that if you look closely at many pictures taken of soldiers in the field you can see the condoms covering their rifle muzzles.

One tactical use of the condom is well-documented. Rubbers made excellent waterproof containers for small items – such as fuses on underwater explosive charges.

Lt. Cmdr. Draper L. Kauffman, founder of the U.S. Navy’s Demolition Teams and preeminent wartime explosives expert, established the program that was the forerunner of the SEALs. During World War II, Kauffman’s instructors demonstrated multiple forms of underwater fuses, fuse igniters and explosive packs that they placed in the hands of trainees.

“The trainees would take cover, counting the seconds and watching the underwater obstacle which had been packed with explosives,” wrote Francis D. Fane and Don Moore in The Naked Warriors: The Elite Fighting Force That Became the Navy Seals.

“Nothing would happen. Another wet fuse. Another misfire. Successive models of waterproof fuse igniters were developed by the Navy during the war, and continued to give trouble in the water despite the best efforts of inventors and testing boards.”

But the beleaguered frogmen discovered that condoms were the perfect size for packing a fuse igniter – and it worked as a waterproof bag. Soon, the Navy demolition teams were not only merrily blowing things up, they were using more than the normal share of condoms — raising the eyebrows of supply officers who wondered just what the Hell was going on.

But the military not only used condoms to keep water out, but to keep water in … namely in a rubber used as a field-expedient canteen.

Various editions of U.S. Air Force Manual 64-3 Survival: Training Edition urged pilots and air crews to make a small homemade personal survival kit carried in a pocket of their flight suit in case they ejected or bailed out.

One of the items recommended — a large non-lubricated prophylactic. When placed in a spare sock for protection against sharp objects and filled with water, it will actually hold several pints.