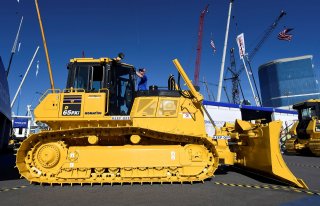 According to frontline politicians, “now” is always the right time, economically speaking, for governments to invest heavily in infrastructure. When unemployment is low and growth reasonable, they say it’s essential we invest to raise productivity or “modernize” the economy. When a pandemic hits, unemployment spikes, and uncertainty drags on recovery, they say we need to build our way to recovery through shovel‐​ready investment.

This rhetorical penchant to support huge government infrastructure packages is bipartisan. President Trump has flirted with major proposals through his whole term. He still apparently wants to use a September 30 transport infrastructure funding deadline to push a $1 trillion funding package for roads, bridges, 5G and rural broadband, prior to the election.

The Biden‐​Harris campaign, of course, promises to “Build Back Better.” They desire “a $2 trillion accelerated investment, with a plan to deploy those resources over his first term” to “create millions of good, union jobs rebuilding America’s crumbling infrastructure – from roads and bridges to green spaces and water systems to electricity grids and universal broadband.”

As the election draws closer, both parties and commentators will tell us that infrastructure investment is win-win—both good “stimulus” in the short‐​term pandemic‐​suffering economy and good for economic growth in the longer term. We will be told this spending can provide employment, accelerate growth, and repair “crumbling infrastructure” simultaneously, ignoring the obvious trade‐​offs associated with fulfilling these aims.

Good infrastructure can, no doubt, grease the wheels of economic activity. But Cato Institute scholars have long warned that a government‐​led infrastructure splurge today would not bring the economic benefits proponents claim. Recent research supports our conclusions.

New working papers from both Valerie Ramey and Gilles Duranton et al suggest public infrastructure investment is not good macroeconomic “stimulus.” With delays in getting projects off the ground and high degrees of crowd out of private sector projects for workers and equipment, throwing money at building things does not do much to boost output or employment in the short‐​term. These results are robust to both theory and evidence across OECD countries, the U.S. over time, and across U.S. states.

In the 2009 ARRA, for example, Ramey shows there were lengthy delays between appropriations and spending. Only 11 percent of Federal Highway Administration appropriations had been spent 4 months after the legislation passed and only half had been spent 16 months’ after. Then there’s the lag to actual building times, let alone the time that elapses before the asset becomes usable. This construction period itself can prove extremely disruptive to other economic activity, particularly if immobilizing existing transport infrastructure.

These effects, Ramey suggests, could even lead to infrastructure investment reducing output and overall employment in the near‐​term. Analyzing papers on highway construction in the ARRA, she concludes:

there is scant empirical evidence that infrastructure investment, or public investment in general, has a short‐​run stimulus effect. There are more papers that find negative effects on employment than positive effects on employment. The ARRA results are particularly negative, since the ARRA spending occurred at a time when interest rates were at the zero lower bound and the unemployment rate was 9 to 10 percent. Despite the slack in the economy and the accommodative monetary policy, the effects on construction employment were either small positive or negative.

Better infrastructure could lead to a more productive economy in the longer‐​term, provided funds are invested in areas markets can’t provide well or where bottlenecks occur. Yet even then Ramey finds that some methods for assessing past infrastructure spending bias their supposed positive impacts on long‐​term output upwards. Regardless, economics happens on the margin. That an old highway had positive effects on GDP tells us little about the benefits of another road today.

Whether an infrastructure package improves economy‐​wide productivity depends on whether the funds are used better than they would have been in market activity. This in turn depends on which projects are selected and how they are financed. On this, there are good reasons to think that politicians, particularly at the federal level, will not choose projects where the returns are greatest. Politicians instead face incentives to invest in projects to help favored constituencies, to “create jobs,” or to fulfill other non‐​economic criteria.

There is little evidence that politicians select projects with long‐​term growth in mind. Many, including Joe Biden, talk of the need to replace “crumbling” infrastructure. But assessments of data on the state of U.S. infrastructure consistently show things are not as bad as politicians suggest. In a new working paper Duranton et al examine claims of crumbling US infrastructure and find little evidence to support the worst case scenarios portrayed in the news, writing:

Perhaps our main conclusion is that, on average, U.S. transportation infrastructure does not seem to be in the dire state that politicians and pundits describe. We find that the quality of interstate highways has improved, the quality of bridges is stable, and the age of buses and subway cars is also about constant.

Randy O’Toole’s extensive work has shown how politicians plough money into loss‐​making rail and public transit projects, while ignoring that a lot of other projects could be viable through private initiatives less prone to cost overruns. The likelihood of policymakers selecting the “wrong” projects is of course heightened during this pandemic, when it is not clear whether transport habits will permanently change. As I concluded in a paper in 2017:

We should therefore not accept claims that government infrastructure spending—as a homogenous entity—is “good for growth” as a general statement. As Duranton et al conclude:

our review of the literature above suggests that transportation improvements lead to a displacement of economic activity while net growth effects are limited. This finding needs to be buttressed and refined. The balance between displacement and net growth effects is likely to differ greatly across projects depending on mode, spatial scale, and whether the project serves a corridor between cities or is a transit improvement within, etc.

For more on the macroeconomics of infrastructure spending, read here.