Sorry, But the Zumwalt Is No True 'Stealth' Ship 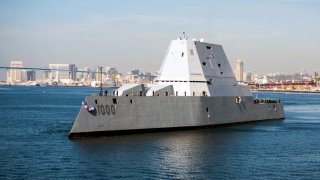 Here's What You Need To Remember: Some of the Zumwalt’s weapons, for instance, are housed in what appear to be rounded, cone-like structures. Simply put, the fewer edges or identifiable shapes you have, the lower the possibility that electromagnetic signals will effectively deliver a signal.

Eluding radar, quietly sailing into enemy territory, and launching long-range precision attacks from less-detectable positions all begin to paint the picture of how a “stealthy” offensive surface destroyers could transform modern maritime warfare.

Differently-shaped, external structures, with sharp angles, pointy edges, and extending vertical designs naturally offer many more areas off which radar pings can bounce. Low observability, by extension, happens when radar has fewer return electromagnetic pings with which to create a rendering of the object. Since electromagnetic pings travel at the speed of light -- a known entity -- and time of travel can be determined, a computer algorithm can determine the shape, size and distance of an enemy object. Acoustic pings operate within the same conceptual framework, simply using sound instead of electricity. Accordingly, Zumwalt engineers sought to build a ship able to elude radar and sonar detection

This first appeared in Warrior Maven here and is being reposted due to reader interest.