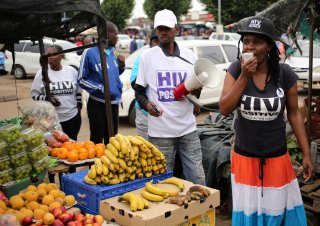 At a time when the U.S. is experiencing one of the worst COVID-19 infection rates among wealthy nations, Americans could take some cautionary lessons from South Africa, the nation that fared the worst during the HIV/AIDS epidemic because of the many stumbles and mistakes of its different governments.

Some South African authors, like Phaswane Mpe and Sindiwe Magona, whose work I study and teach, have written about the tragic effects of a country steeped in denialism about the virus, the ramifications of which are still being felt today.

In 2019, 7.7 million South Africans were HIV positive and the HIV prevalence among adults ages 15 to 49 was a staggering 20%. A multiyear study tells an even more sobering story: Between 1997 and 2010, as many as 2.8 million South Africans died of HIV/AIDS-related causes – an average of over 200,000 deaths per year.

These numbers were once incomprehensible to Americans – that is, until 2020, when the U.S. lost over 300,000 people to the coronavirus. The truth about what can happen in the absence of a carefully calibrated public health plan became painfully clear.

Of course, HIV and COVID-19 are two very different viruses. HIV is transmitted through the exchange of bodily fluid and is stigmatized. COVID-19 is passed through small droplets in a person’s breath and hasn’t been tied to any sense of shame.

On the other hand, because COVID is transmitted through casual contact and not an intimate exchange, it spreads much more easily. With AIDS, you have to primarily think carefully about whom to sleep with; with COVID-19, you need to worry about getting within 6 feet of anyone – lover, family member, neighbor or stranger.

But despite these differences between the viruses, there is one factor that has played out in tragically similar ways: neglect and misinformation at the highest levels of government.

Failure from the top

When it came to handling the AIDS crisis, South Africa soon gained notoriety for the ineptitude of its leaders.

The virus first emerged in South Africa in 1982, 12 years before apartheid was abolished. At the time, the government, led by Prime Minister P.W. Botha, was consumed with unrest at home. It gave very little attention to a condition that initially seemed to affect only marginalized groups: gay men, prostitutes, drug users and, eventually, the general Black population.

In 1994, Nelson Mandela was inaugurated as the first leader of the newly independent, multiracial democracy. His administration took the virus more seriously; for example, the country’s new constitution included protections against AIDS discrimination. But the administration nonetheless proved ill-prepared to handle an epidemic of such magnitude at a time when it was only beginning to put a coherent governmental infrastructure in place. Consequently, the HIV adult infection rate, which was 8% when he took office, grew to 20% by the end of his five-year term.

The person rightfully assigned the greatest blame for South Africa’s AIDS debacle is Thabo Mbeki, who succeeded Nelson Mandela in 1999 and served until 2008. Mbeki used his bully pulpit to fan misinformation about the virus, from insisting that HIV was not the cause of AIDS, to claiming that AIDS was part of a neocolonialist plot to continue to exploit Africa and oppress its people.

The skepticism of Mbeki and his supporters was, in part, motivated by legitimate suspicion and resentment toward the West after centuries of foreign intervention in African lives. However, it meant that HIV recommendations based on biomedical research could be dismissed as directives intended to foster African dependence on Western medicine.

For example, when antiretroviral drugs were developed, Mbeki’s Minister of Health, Manto Tshabalala-Msimang, urged those afflicted with the virus to continue taking traditional medicines and consume a diet of lemons, garlic, beetroot and olive oil. The new drugs were, in her view, tailored for Western populations.

A public smile, a private tragedy

Because of the general inattention given to AIDS, denialism continued to run deep, even as South Africans found themselves attending multiple funerals each month.

The South African writer Sindiwe Magona described this unsettling atmosphere in her introduction to her 2008 novel “Beauty’s Gift.” She writes of her first trip home to South Africa in 1988 after hearing from the U.S. about the epidemic that was ravishing her country.

“As we heard or read in well-reputed magazines and newspapers, nothing short of genocide was taking place in South Africa. So, when I went home, this last time, I was prepared to see signs of the fear I felt – see them on people’s faces. Surely, I thought as I got ready for this trip, such a calamity must have everybody in South Africa in mourning garb, wearing long faces, and noticeably devoid of joy.”

But she encountered an entirely unexpected scene:

“The broadly smiling faces, unbridled laughter and wholesale hilarity were from another country. My mind refused to juxtapose the spectacle before my eyes with the horror I expected, the horror I’d gotten from reports. How could a dying people be this gleeful?”

She goes on to describe the tremendous disconnect between what people were willing to share privately and the official, public attitude toward the illness.

South Africa’s tragic AIDS history should sound disturbingly familiar to Americans. There are, of course, Donald Trump’s various manifestations of denialism: his claims that COVID-19 wasn’t going to spread in the U.S. and would magically disappear if it did take hold; that lockdowns were a bigger threat than the virus itself; that hydrochloroquine was a cure-all for the hospitalized; that 99% of cases were “totally harmless”; and that the virus would disappear as soon as the 2020 elections were over.

These dangerous assertions have been echoed by both conspiracy theorists and [government officials], and the ramifications of such misinformation are easily observed in the portion of the population that ignores social distancing guidelines and considers mask-wearing a threat to the American way of life.

Can a nation come to its senses?

This comparison between South Africa and the U.S. – as depressing as it may be – does offer some hope.

Jacob Zuma, Mbeki’s successor, made enormous improvements in the country’s HIV response in his nine years in office. He oversaw a massive antiretroviral treatment program, making the treatments available as many as 71% of infected adults and 47% of children.

In South Africa today, there are few, if any, traces of denialist thinking; in fact, there is so much discomfort over what happened with HIV in the past that Thabo Mbeki is now refuting claims that he ever said HIV does not cause AIDS.

But South Africa’s story also carries the sobering reality that recovering from denialism takes time. And for the U.S., with cases exploding and more than 3,000 deaths per day, there isn’t much time to spare.

The recent FDA authorization of two effective vaccines shows there’s a light at the end of the tunnel. But there will still be formidable challenges in the coming months: coordinating the distribution of the vaccine to those who need it most; instilling patience in those who must wait their turn; and creating public health messaging for those wary of inoculation.

With mixed messages from the government over the danger of the coronavirus, it’s no surprise that public trust in a vaccine’s safety and effectiveness is lukewarm, at best. An Associated Press poll from early December found that roughly 50% of Americans either weren’t sure or said they definitely wouldn’t get a vaccine.

Unfortunately, the recovery will continue to be hindered by those who, under the spell of denialism, refuse to confront the realities of a virus that has taken such a costly toll on the nation.