South Africa's Lightweight Aircraft Is Made for Counterinsurgency 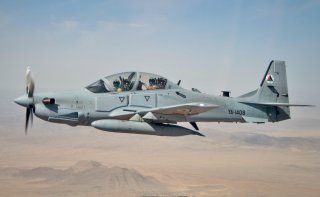 Here's What You Need to Remember: Designed a low cost military aircraft—the hope is sell the plane for well under $10 million per unit—that can adapted for many missions across a variant of environment, the ARHLAC has a modular design.

The Lockheed Martin F-35 Joint Strike Fighter, Boeing F/A-18E/F Super Hornet Dassault Rafale, Eurofighter Typhoon and the Sukhoi Su-35 Flanker dominate the headlines when it comes to the combat aircraft market, but there are many places in the world where such extravagant machines are just not needed. In certain parts of the world, even relatively cheap dedicated ground attack aircraft like a U.S. Air Force A-10 Warthog or even the Russian-built Su-25 Frogfoot are overkill. One such market is Africa—and a South African defense conglomerate called the Paramount Group hopes to take advantage of that market gap with their indigenously developed Advanced High-Performance Reconnaissance Light Aircraft (AHRLAC).

While it is true that some African nations have purchased expensive high-end Russian fighters like the Su-30, most of those countries save for Algeria don’t have the capability to maintain or operate large fleets of Flankers. Algeria has forty-four very capable Su-30MKAs in service and placed an order for fourteen more jets, but the North African nation is relatively well developed and well resourced. Angola too has a fleet of 18 Su-30Ks on order. Uganda operates a half dozen Su-30Ks—but it doesn’t have the resources to really operate or maintain those jets. The Flankers are essentially an expensive status symbol for a country that can ill-afford it.

Even the Russian-built Frogfoot is too expensive to operate in numbers for most of these nations. Only a few African nations operate more than a handful of Su-25s. Chad, Equatorial Guinea, Ethiopia, Gambia, Ivory Coast and Sudan operate less than a dozen such aircraft and the majority of those own less than half that number. Angola operates about 15 Frogfoots, but the aircraft that best suits its needs are its half-dozen very cheap and very effective Embraer EMB-314 Super Tucano counter-insurgency machines. The Brazilian warplane is much cheaper to operate and has much greater endurance. Even South Africa, which has the most developed economy on the continent, barely flies its fleet of 26 Saab JAS-39C/D Gripens.

Paramount, recognizing that it might have an opportunity, started developing the light turboprop counter-insurgency machine in 2009 with the African market in mind. The design incorporates many features from attack helicopters—including a high tandem canopy design. “The types of threats that countries around the world face has changed significantly over the last few years,” the company says. “Many of the threats being faced does not justify the operating cost of fast jet fighters.”

The aircraft—which is powered by a 950shp Pratt & Whitney PT-6 turboprop—made its first flight in 2014. It’s the first fully indigenous combat aircraft built in Africa (the Rooivalk attack helicopter has its origins in the French Aérospatiale Alouette III). Designed a low cost military aircraft—the hope is sell the plane for well under $10 million per unit—that can adapted for many missions across a variant of environment, the ARHLAC has a modular design.

Instead of fixed suite of mission systems, the aircraft has a modular bay with can be adapted for a range of different kind of operations. Even the armor is completely modular and can be removed if the mission doesn’t require it.  In addition to counterinsurgency, it can be used for border patrols, intelligence gathering, armed reconnaissance or even as air resupply machine. Civilian versions of the ARHLAC might be used for law enforcement activities to counter poaching and what not. The aircraft can accommodate forward looking infrared cameras, synthetic aperture radar and various electronic warfare and intelligence gathering sensors as needed—which are, of course, optional extras.

The AHRLAC will be able to carry 1,800lbs of weapons on six hard points. South Africa has a range of indigenous weapon it can offer to potential clients—the Denel Mokopa anti-tank missile is just one example. The AHRLAC also has a 20mm cannon in the fuselage. It can takeoff in about 1,800ft with a full load from a semi-prepared strip; it has a mission radius of 1,150 nautical miles and a service ceiling of 31,000ft. Maximum cruise speed is about 270 knots.

Paramount does not seem to have found a customer for the ARHLAC just yet—but it has continued developing the aircraft. It recently revealed an unmanned version of the plane at the Africa Aerospace and Defense show last year in Centurion—just outside the capital of Pretoria. But the company will probably find a customer given its low prices and the versatility of its product. The ARHLACs only real weakness is that South Africa has to seek approval to export the PT-6 from the U.S. government—which could be a problem for some potential customers. However, only time will tell if Paramount is holding a winning hand.