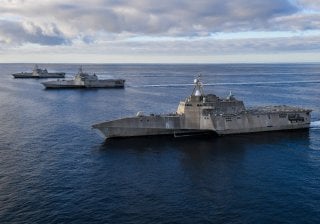 Here's What You Need to Remember: The 20 heavily-armed frigates will replace roughly half of the 50 or so Littoral Combat Ships (LCS) that the Navy had planned to buy before realizing that the lightly-armed LCS likely couldn’t survive in a major shooting war.

Two LCSs, Fort Worth and Freedom, are the first to arrive on the scene of the massacre. The American destroyer Halseyalso is on the way.

David Axe served as Defense Editor of the National Interest. He is the author of the graphic novels War Fix,War Is Boring and Machete Squad. This article is being republished due to reader interest.