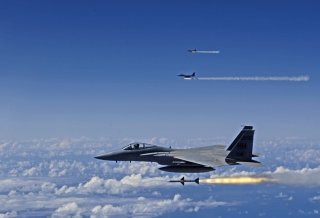 Here's What You Need To Remember: The F-15K is the only Korean fighter capable of hauling the deadly 3,000-pound Taurus missile.

In late 2017, the Republic of Korea Air Force (ROKAF) test-fired a Taurus cruise missile in response to a North Korean ballistic missile test. In this video, you can see as an F-15K launch the boxy weapon, which plunges straight through the roof of a practice target, penetrating into the ground below before its main warhead detonates.

For decades, the South Korean military has had to prepare for a conflict in which its cities, especially the capital of Seoul, would be on the receiving end of North Korean artillery, chemical weapons, and ballistic missiles. Now, such an onslaught might potentially include nuclear warheads. Though such a scenario must be avoided at all costs, should it occur, it would be vital for South Korean and U.S. forces to destroy these heavily fortified missile and artillery sites as swiftly as possible.

That’s the mission assigned to the sixty F-15K Slam Eagles in the Republic of Korea Air Force. Based on the F-15E Strike Eagle fighter bomber in U.S. Air Force, the Slam Eagles have souped-up sensors and electronic warfare systems and now are loaded with bunker-busting cruise missiles to blast open North Korean missile silos.

The Strike Eagle is a fighter-bomber variant of the F-15 Eagle, loaded with extra weapons pylons, fuel tanks, and sensors at the cost of modestly decreased thrust-to-weight ratio and maneuverability. The two-seat jets can still sprint at two-and-a-half times the speed of sound and can lug an extraordinary 23,000 pounds of weapons, nearly three times the bomb load of a strategic bomber in World War II. On the downside, the large, twin-engine F-15 is much more expensive to operate than, say, a single-engine F-16, though the additional turbofan does contribute to a lower accident rate.

South Korea chose to procure forty F-15Ks in 2002 for $4.2 billion as the first part of a three-phase F-X program to modernize its jet fighter force, beating out the Eurofighter Typhoon, the French Rafale, and an earlier variant of the Su-35. Nearly 40 percent of the components were built by Korean firms, including fuselage, wings, and much of the avionics then were assembled by Boeing in St. Louis, Missouri.

In 2008 Seoul ordered a second batch of twenty-one F-15Ks for Phase II of the F-X program to replace the F-5B Freedom Fighters it was retiring. (The order included one extra aircraft to fill in for an F-15K which fatally crashed in 2006 when its crew passed out performing a high-G maneuver.) These planes featured Sniper-XR targeting pods and reverted to F100 PW-229 engines to benefit from parts commonality with the engines on Korea’s KF-16 fighters.

South Korea initially ordered 170 of the weapons from their German and Swedish manufacturers, with the delivery of that batch completing in 2017. The five-meter long jet-powered missile, known as the KEPD-350K, soars just below the speed of sound and can hit targets more than 300 miles away—far enough to strike any location in North Korea when launched from within South Korean airspace.

To evade detection, the Taurus skims at around 130 feet above the ground and furthermore boasts a stealthy radar profile and jam-resistant countermeasures. The missile uses four different navigational systems (GPS, inertial, infrared, and terrain-referencing) for guidance so that it can remain on course even if one of them fails. It can even be programmed to scan for a three-dimensional image of the target once it’s close to its destination and can abort the attack without causing collateral damage if it can’t be found.

As it closes in on the target, a Taurus rears up higher into the air and then plunges down at a steep angle for optimal penetration of its two-stage Mephisto warhead. A precursor charge blasts open the hardened exterior of the target or blow away obstructing soil, then a delayed fuse munition detonates once the bomb has penetrated inside. This missile can pierce concrete walls up to six meters thick, precisely the kind of capability necessary to knock out hardened missile and artillery sites poised to rain death on South Korea.

In fact, in December 2016 the Republic of Korea ordered ninety additional KEPD-350s, due to the ever-increasing tempo of Pyongyang’s missile tests. Furthermore, Seoul is interested in fielding a lighter version of the Taurus missile with a range of 250 miles that it could fit on its growing fleet of FA-50 Golden Eagle light attack jets. Of course, in a conflict with its northern neighbor, South Korea would receive massive additional fire support from U.S. Air Force and Navy fighters and bombers, as well as Tomahawk missiles fired by warships and enormous Ohio-class cruise missiles submarines.

The Slam Eagle and its U.S. counterparts could therefore only hope to mitigate a ruinous North Korean bombardment over time, not eliminate the threat from the onset. No one should delude themselves into thinking a preemptive strike or a rapid counter-strike would contain the loss of life to an acceptable level. That doesn’t make the F-15K’s role any less vital. Indeed, should the worst come to pass, thousands of lives in South Korea and perhaps even on U.S. soil would be affected by how quickly the North Korean batteries could be silenced.

Eventually, South Korea intends to procure forty F-35 Lightning stealth fighters for the third phase of the F-X program while retiring its venerable F-4 Phantoms. Seoul is also planning to produce 200 home-designed cruise missiles to be mounted on its indigenous KF-X jet fighter, when and if that materializes. Until those are ready, the powerful Slam Eagle will remain South Korea’s top jet fighter—and one that plays an especially critical role in that country’s defense.