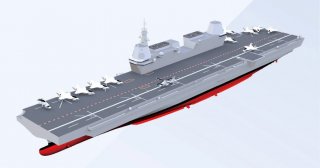 So you are someone who takes defence policy seriously. We know that, because you’re reading The Strategist. And because you take defence policy seriously, every so often you are outraged at the waste of scarce funding on acquisitions that do little for national security but, rather, lavishly feed some political constituency, an industry or the egos of military officers.

For there is a country that daily faces a risk of cataclysmic war: invasion by an army of more than 1 million, mass artillery bombardment of its capital and even nuclear attack. And its latest proposed acquisition? An aircraft carrier—a meaningless hole in the water into which the Republic of Korea Navy hopes the country will pour about US$5 billion.

And if you’re not American, be thankful for that, too, because the US indirectly finances such wasteful spending, paying several billions of dollars a year to protect South Korea from North Korea while officials and industrialists in Seoul divert domestic funds to national vanity projects. Others include an indigenous fighter (essentially, a reinvented Boeing F/A-18E/F Block II Super Hornet that will be built 21 years after the original), a space launcher that will hardly be used, and an attack helicopter with a bulky, compromised design forced on it by the program’s need for a civil version.

The navy’s main justification for building an aircraft carrier is to make naval operations independent of air support from the land when fighting unnamed current and future threats. The defence ministry is calling the ship ‘CVX’ (previously, ‘LPX-II’). It would be equipped with Lockheed Martin F-35B Lightnings, capable of short take-off and vertical landing.

For war with North Korea, the justification is nonsense, because the Korean peninsula is so small that land-based fighters can indeed cover the navy’s ships, especially with tanker support. Also, all North Korean targets are in fighter strike range of South Korean air bases, so a costly mobile base at sea is unnecessary.

If the unnamed future threat is China or (fervently imagined) Japan, then building CVX makes even less sense, because it would be so vulnerable to attack by land-based missiles, aircraft and submarines.

The real, childish reasons for South Korea buying an aircraft carrier are all too plain. One is that naval officers love big ships and are especially proud of aircraft carriers. The other is a persistent factor familiar to every observer of South Korean technology and defence programs: a desire to match or outdo Japan.

The push to build this ship strengthened immediately after 2017 news reports, since confirmed, that Japan would adapt two helicopter carriers to operate F-35Bs. (Japan also has plenty of costly and doubtfully justifiable indigenous programs, but the inexpensive adaptation of the helicopter carriers is not one of them. And Japan has a reason for taking F-35Bs to sea: air defence over the Pacific.)

South Korea’s aircraft carrier is so far following a familiar path for questionable acquisitions in that country: decades of strengthening advocacy has finally achieved defence ministry backing but, with it, rising criticism and still no parliamentary approval. After this stage in such a program, we normally see more setbacks but relentless advocacy until, almost always, a full acquisition budget is allocated.

So there is a good chance that CVX will be built. The defence ministry is planning on full funding beginning in 2022 and the ship entering service in 2030.

The ministry last year asked the parliament for 10.1 billion won (A$11.6 million) to do preliminary work on this project in 2021; instead, it got a derisory 100 million won (A$115,000) to pay for a feasibility study, which will be delivered in August. Since the ministry’s acquisition agency will produce the report, there can be no doubt that the supposed study will declare the project justifiable, desirable and, altogether, a jolly good idea.

Acquisition would cost about 2.03 trillion won (A$2.3 billion), the ministry says. The figure doesn’t include paying for the required 20 F-35Bs, which the air force would reportedly operate at sea. The ship would need helicopters, too, so the total cost would be close to A$6.5 billion. (In a controversy within the controversy, air force officers don’t want F-35Bs. The service is already acquiring 40 F-35As, designed for concrete runways, and would prefer to buy another 20 fighters of that conventional and more capable version.)

To help sell CVX to parliament, the navy describes it as a light aircraft carrier, even though it would not be at all light. At a 4 February seminar, the navy said its unladen displacement would be in the 30,000-tonne class, which can be interpreted as anything up to 39,999 tonnes. Since the length would be 265 metres and the width (apparently not beam) would be 43 metres, a full-load displacement of 50,000 tonnes looks plausible.

The air group would comprise 12 F-35Bs and eight helicopters, or 16 F-35Bs and four helicopters—not a lot for all the steel that would be carrying them around. The navy is probably leaving space for more F-35Bs that it hopes the government will buy later.

The current proposal has emerged from repurposing a provisional plan for an assault ship. Renderings of successive concept designs have had an amphibious whiff about them, notably by lacking large flight-deck overhangs and a ski jump. (US assault ships have neither.) Both features should appear in time as the project looks again at how aeroplanes are best operated at sea. The capacity to store, launch and recover them rises dramatically with flight deck width. And a jet that is thrown upwards by a ski jump as it goes over the bow can carry more fuel and weapons than one that departs fully horizontally.

The latest CVX concept, prepared by Hyundai Heavy Industries, has two islands, following the configuration of the Royal Navy’s two Queen Elizabeth–class carriers. Among the advantages is separation of propulsion and electrical machinery. Indeed, Aviation Week reports that the British consortium that built the Queen Elizabeths proposes to provide technical data on their design to the South Korean government and shipyards.

The South Korean concept also includes a radar operating in the X and S bands, a 32-cell vertical launcher carrying indigenous short- and long-range air-defence missiles, and a fast-firing gatling gun for last-ditch missile defence. All of these systems would be indigenously developed and all would, to varying degrees, be reinventions of what’s already available.

Nationalism helps drive South Korean technology programs. There is in fact a word for the phenomenon, ‘techno-nationalism’. But, so far, the carrier proposal is pushing the limits of what techno-nationalism will support. Opposition to the proposal has appeared not just in parliament—where, for example, two politicians, retired generals of the army, said the money should instead be spent on F-35As or Aegis air-defence destroyers. Doubts were also expressed when the navy posted a video of its February seminar on YouTube. Within three hours, an avalanche of criticism had appeared in the comment section. The navy promptly deleted the video—but it’s back up now, with the comment function disabled.