The Soviet Union's First Nuclear Submarine Was Chernobyl at Sea 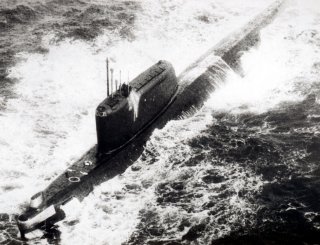 Here's What You Need To Remember: To commission the submarine as quickly as possible, its production was rushed, and corners were cut. The ensuing flaws, and the accidents they caused, ensured the submarine's reputation as a "widowmaker" for years to come.

The K-19 was the Soviet Union’s first Soviet submarine equipped with nuclear missiles. It was deadly — to the unfortunate sailors who had to make up the crew.

The K-19 was commanded by Nikolai Vladimirovich Zateyev. Zateyev had shown his promise as a Navigation Officer and eventually received a promotion to Captain. His excellent performance was noticed by the World War II hero-giant and Marshal of the Soviet Union Georgy Zhukov. When the crew of the K-19 was being drawn up, Zateyev was given auspicious command as the Captain.

As a part of the Cold War arms race, the United States launched the USS Nautilus in 1958. Being nuclear powered, and thus not dependent on fuel refills like contemporary diesel designs, the Nautilus achieved a number of firsts, including first watercraft to reach the geographic North Pole and the first submerged voyage around the North Pole.

The Soviet Union was ahead in the field of rocketry and the space race front — Sputnik I, the first artificial satellite was launched by the Soviet Union in 1957. The Soviet Union also had a formidable nuclear arsenal. But the Soviets were losing the nuclear-powered arms race, particularly under the water.

In an effort to get the K-19 into the ocean as quickly as possible, the speed of production was prioritized over testing and quality of workmanship. The K-19 was a rush-job that suffered from a number of manufacturing defects and inherent design flaws which led to a number of accidents — and one near catastrophe.

During the manufacturing process, a bit of hot solder dropped onto a coolant pipe that led into the reactor core, creating a microscopic crack that went unnoticed. This accident would prove to be fatal.

Traditionally, ships are christened with a bottle of champagne before being launched. In keeping with tradition, the K-19 was struck with a bottle of Soviet-vintage bubbly — which bounced off the rubber-clad hull, rolling down and hitting a propeller screw. Bad luck indeed.

In 1961, the K-19 was in the North Atlantic on a training mission. In the middle of maneuvers, the damaged coolant pipe burst and coolant rapidly dripped out. Because the K-19 had been launched so quickly, it was not equipped with a backup coolant system.

A reactor meltdown inside the submarine would have been catastrophic for the 139 souls on board. But there was a much graver danger too.

Captain Zateyev believed that if the reactor exploded, it could cause the United States and NATO to believe the Soviet Union was attempting a nuclear strike, potentially causing a preemptive retaliation and World War III.

In an interview years later, Zateyev felt completely overwhelmed, unsure of what to do or how to fix the situation. The weight of his men’s lives hung heavily upon him. “At one point, I thought of going down to my cabin, drawing my pistol and finishing all my problems at once,” he said.

But he rallied his crew and explained the situation. A new coolant system had to quickly be jury-rigged and manually installed. But the K-19 lacked sufficient personal protective gear — the best they had were naval raincoats and gas masks. Zateyev asked for volunteers. Twenty-two sailors volunteered to die.

Heroes of the Soviet Union

Zateyev organized the sailors in brigades of three men each. They would run into the reactor compartment, staying for only five to ten minutes in order to reduce their radiation exposure to a minimum.

Captain Zateyev remembered the walk down to the reactor compartment.

“I accompanied him [the first volunteer] to the reactor room door — to his death. And I said, ‘Well, Boris, do you know where you’re going?’

“And he said, ‘I know, comrade captain.’

Five minutes later, Korchilov stumbled out of the reactor room, tore off his gas mask and vomited.”

The exposure, though for a short time, was orders of magnitude greater than what would be a lethal dose.

“Right on the spot their appearances began changing. Skin not protected by clothing began to redden, face and hands began to swell. Dots of blood began to appear on their foreheads, under their hair. Within two hours we couldn’t recognize them,” Zateyev said. “People died fully conscious, in terrible pain. They couldn’t speak, but they could whisper. They begged us to kill them.”

But disaster, and World War III, had been averted, though at a high cost. Over the next week, eight of the volunteers died. Two years after the incident, all 22 volunteers would pass away.

Peace at all Costs

In 2006, Mikhail Gorbachev nominated Captain Zateyev and the crew of the K-19 for the Nobel Peace Prize for their personal courage, which "averted a thermal explosion of the reactor and a subsequent environmental disaster" and possible Cold War confrontation with NATO and the United States.

In 1972, a fire onboard K-19 killed 32 other sailors, securing its reputation as a cursed ship. Shortly thereafter, “Hiroshima” was permanently decommissioned.

Caleb Larson is a defense writer for the National Interest. He holds a Master of Public Policy and covers U.S. and Russian security, European defense issues, and German politics and culture. This article first appeared in April 2020.