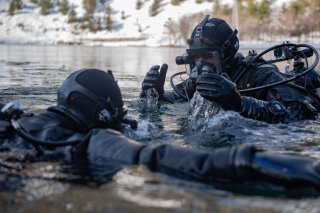 Recently, a Combat Diver Special Forces team had the opportunity to make a special dive inside a mountain base used by the Space Force.

A 10th Special Forces Group dive team went into the Cheyenne Mountain Complex, in Colorado, and dived to access the Complex’s reservoirs.

The Cheyenne Mountain Complex is a Space Force base that houses several capabilities, ranging from electronic surveillance to missile defense to aerospace operations. In addition, the Complex serves as the alternate headquarters for the North American Aerospace Defense Command (NORAD) and U.S. Air Force Space Command and U.S. Northern Command (USNORTHCOM), which are headquartered nearby at Peterson Air Force Base.

The Complex is designed to operate independently from outside help, so the condition of its reservoirs has to be perfect.

“They originally contracted with a civilian company to get this done,” said the 10th Special Forces Group’s Dive Life Support Maintenance Facility’s officer in charge in a press release. “My brother, an Air Force Logistical Officer tasked to the Space Force, recommended they get in contact with (us) to do it for free.”

The Cheyenne Mountain Complex has three reservoirs with water for different purposes, such as cooling generators and expelling exhaust.

The Special Forces dive team accessed the structural integrity of the reservoirs to ensure that they didn’t need maintenance.

“Dive operations don’t happen very often in special forces,” added the Special Forces officer. “This was a good chance for us to go out and showcase our capabilities as a legitimate maritime force within (Special Operations Command) to actually do a real world mission. It’s not infiltrating into enemy country or territory, but it was a chance for us to show everyone that we do have this capability and it’s important to keep the capability within the Special Forces community.”

The last years have been hard on the Special Forces combat diver capability. The wars in Afghanistan, Iraq, and Syria, where the opportunities for underwater operations are limited, meant that the combat diver capability was somewhat shunned. Dive teams had to fight tooth and nail for basic funding, and training opportunities were few and far between. Indeed, some dive teams were hard-pressed to maintain their dive status, which requires a few dives per year.

Despite the drawdown from the wars in the Middle East, dive teams across the Special Forces Regiment are still experiencing difficulties. To be sure, the situation varies from Group to Group, but a common thread regardless of unit is the lack of understanding, and thus of appreciating, the capability’s potential.