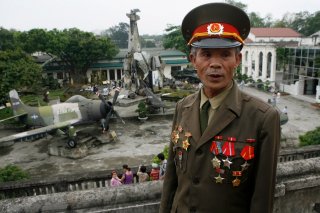 As families across America gathered together to enjoy their Thanksgiving dinner in the chill of late fall, a six-man team of commandos from covert special operations units were fighting for their very lives against 30,000 North Vietnamese troops in the jungles of Southeast Asia.

The six commandos belonged to MACV-SOG, a highly classified special operations unit that conducted some of the most harrowing missions in the Vietnam War.

The Covert Men and Mission of MACV-SOG

From 1964 to 1972, MACV-SOG took the fight to the enemy with an enviable grit, resolution, and guile, often turning up in the most unexpected places.

MACV-SOG mainly went after the North Vietnamese and Viet Cong supply routes that fed the Communist onslaught into South Vietnam. The Ho Chi Minh Trail, which snaked from North Vietnam west into Laos and Cambodia only to turn east again in South Vietnam, was an above-ground and underground complex that stretched for hundreds of miles. What was sinister about the Ho Chin Minh Trail was that nominally, North Vietnamese troops weren’t supposed to be there, as Hanoi had repeatedly announced its intentions to respect the neutrality of Laos and Cambodia.

But if the North Vietnamese were there, so had to be American commandos. As a result, MACV-SOG teams operated in countries that successive U.S. administrations had insisted that no American troops were in.

The special operations unit was comprised solely of commandos from across the U.S. special operations community, including Navy SEALs, Recon Marines, and Air Commandos. But it was the Army Special Forces operators—nicknamed “Green Berets”—that formed the cornerstone of the unit. Using their unconventional warfare and foreign internal defense—the training and advising of foreign troops—capabilities, Green Berets recruited, trained, and led teams of native mercenaries against the North Vietnamese and Viet Cong.

The covert outfit cooperated closely with the U.S. intelligence community and ran some of the most daring special operation missions in U.S. military history. The operation of Spike Team Idaho during the closing days of November 1968 was such a mission.

Turkey, Gravy, and the North Vietnamese

Following the Tet Offensive in January 1968, the U.S. intelligence community was concerned about practically all North Vietnamese troop movements. So when three entire North Vietnamese divisions went missing in November, Army intel and the CIA were eager to find them.

Their job was to find the 1st, 3rd, and 7th North Vietnamese Army divisions, about 30,000 troops, that had gone missing somewhere on the border with Cambodia. These troops were part of an approximately 100,000-strong North Vietnamese presence in the neighboring country, and the Pentagon feared that they could stage an attack on Saigon from their safe haven in Cambodia.

Once they had located the North Vietnamese troops, ST Idaho was to relay their position and exfiltrate as quickly and quietly as possible (in other words, get out of dodge). If they could snatch an enemy prisoner while they were at it from whom vital intelligence could be gleaned, that much the better.

If going after 30,000 enemy troops with just six men wasn’t enough, the MACV-SOG commandos were further hindered by the fact that they couldn’t call in fixed-wing close air support because the State Department had imposed very strict rules of engagement for the area of operations. They could only go 12 miles inside Cambodian airspace.

Not Your Average Thanksgiving

On Thanksgiving morning, ST Idaho inserted and started patrolling toward where they believed the North Vietnamese might be. After a few minutes, they spotted campfires, and moved in their direction.

ST Idaho soon found itself inside a huge North Vietnamese camp. But it was an empty camp… and no one challenged them—at least for now. The commandos started snapping pictures and searching for documents and maps that could prove useful to their intelligence shops. While most of the commandos were focused on their treasure-hunting expedition, their point man, an indigenous mercenary, literally sensed the enemy’s approach and alerted the team. Meyer, who trusted his teammates with his life, took him at his word and made the decision to exfiltrate.

But as they were leaving camp, hundreds of North Vietnamese troops poured into view from seemingly out of nowhere. Before long, it was clear that they were coming straight at them from both the north and south. Their point man had been right, ST Idaho was now facing an utterly overwhelming enemy force. If they were going to survive, they needed to get out of there in a hurry.

ST Idaho ran for its life, only stopping to put down suppressive fire or to plant Claymore mines in a vain attempt at stopping the Communists’ pursuit. The team was made up of highly trained and experienced special operations warfighters, often more than a match for even the most unfair fights, but no matter how many North Vietnamese they killed, more seemed to take their place.

The MACV-SOG commandos reached their landing zone and hastily dug in, waiting for the helicopters to exfiltrate them. But by now, the Communists were almost on top of them.

At that very moment, UH-1P Hueys from the Air Force’s 20th Special Operations Squadron—nicknamed the “Green Hornets”—arrived; literally just as ST Idaho was about to be overrun by the North Vietnamese hordes.

Firing their M134 miniguns and M-60 machineguns, the Green Hornets were able to stem the North Vietnamese advance, giving the MACV-SOG commandos some precious breathing space to regroup. With the enemy force still attempting to advance, the Green Hornets poured rounds in their direction, curbing their progress for just long enough to allow the exhausted warfighters to board the waiting choppers.

As in a movie, the North Vietnamese flooded ST Idaho’s perimeter as the team was flying away into the sunset and safety. They had found the enemy—and survived. For the men of ST Idaho, that was something to be thankful for.