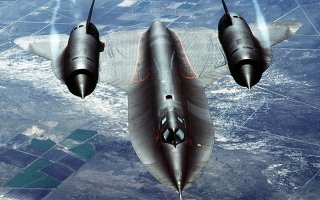 Here's What You Need to Know: The SR-71 could outrun anything it ran into.

Elon Musk is often seen as either a visionary that will change the world or just the latest billionaire eccentric with crazy ideas. Perhaps the man who seems to evoke not only the lifestyle but also the work ethic of Howard Hughes is a mix of both. What is clear is that he has really good taste in airplanes.

Musk's favorite is the Lockheed Martin SR-71—the legendary U.S. spy plane that could fly three times the speed of sound.

He and his girlfriend, the singer Grimes (real name Claire Elise Boucher), loved the super-fast plane so much that they named their first child after… its predecessor. In a tweet, Grimes explained that the baby boy's name, which is X Æ A-12, comes from a strange combination where X is the unknown variable, Æ is her "elven" spelling of Ai for both love and artificial intelligence, while the A-12 is the precursor to the "SR-17 (sic)."

As Grimes explained, "No weapons, no defenses, just speed. Great in battle, but non-violent."

This does beg the question why the child couldn't have been named X Æ SR-71, but as noted by Grimes' tweet she was confused over exactly what was her favorite aircraft. Moreover, while the SR-71 Blackbird became prominent during the Cold War when it was used primarily for high-altitude surveillance, the A-12 "Oxcart" was actually a faster single-seat version.

The Air Force ordered the larger SR-71 variant as it was deemed superior a "fly off" of the two aircraft. In addition there were fears that Soviet technology was catching up that could render the A-12 Oxcart obsolete.

The two-seater SR-71 Blackbird featured more radar-reflecting surface, which made it less easily detected by enemy anti-aircraft. It could fly at speeds in excess of 2,000 mph, or about three times the speed of sound, and at altitudes that were greater than 80,000 feet. It could cross continents in just a few hours, but it flew so high that pilots navigating by sight couldn't rely on ground features such as roads, but instead needed to look at the mountains, rivers and major coastlines.

When in danger, the pilot could engage the aircraft's afterburners. Simply put, if seen, the SR-71 could outrun rather than out gun anything that came at it.

The futuristic looking plane wasn't without problems however. It required a special fuel, and had to take off with minimum fuel in the tanks and then be refueled once in the air.

Perhaps Musk sees the fuel problem as a non-issue as his Tesla, Inc. has developed electric vehicles and clean energy. Still, naming a child after an airplane still seems like an odd choice—but celebrities have often gone for non-traditional names.

Yet, with respect to Grimes, the A-12 part of the baby's name isn't the only confusing part. Some have noted that the Æ isn't in any way similar to "Ai," but then again neither Grimes nor Musk have actually said how to actually pronounce the child's name. Perhaps it will come down to a case of just calling him, "Elon Musk's and Grimes' son," akin to The Artist Formerly Known As Prince.