Star Wars: Why Russia Wanted to Put a ‘Cannon’ in Space 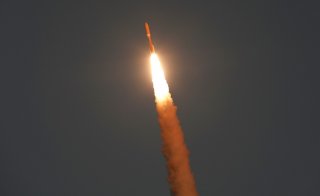 Here's What You Need to Remember: The Soviet space cannon was defensive, but what would it have defended against? The fictional U.S. Space Marines in that famous and bizarre scene from the James Bond movie "Moonraker"? Anti-satellite weapons exist— China is reportedly developing them — while the U.S. destroyed one of its malfunctioning satellites with an anti-ballistic missile in 2006.

Space warfare expert Paul Szymanski believes that it was possible to operate the cannon in space, but there would have been some issues, especially in fire control. "The trajectory of the fired shell would be curved, based on gravity (same as on Earth), so the aiming mechanism would have to account for this, along with the great speeds of the Almaz spacecraft and the target," he tells The National Interest. In addition, destroying a high-speed anti-space weapon at close range might have resulted in Almaz being hit by fast debris.