States Are Reopening—So Why Are We Still Paying $600 Per Week in Coronavirus Unemployment? 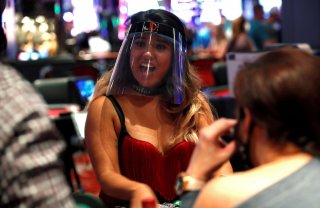 According to The New York Times and as depicted in the map below, “All 50 states have begun to reopen in some way after the coronavirus thrust the country into lockdown starting in March.”

That fact is important as Congress considers what to do about the unprecedented $600 bonus added through July to every unemployment benefit check. The Senate had a robust debate in March when this extraordinary bonus was created about why it was needed. As the quotes below from that debate highlight, key legislators argued the bonus was needed “while the consumer economy is shuttered” and “we are asking these people to stay home.” Those conditions are lifting as lockdowns end and all 50 states reopen their economies, and hiring and consumer spending are beginning to show signs of recovery.  That suggests the $600 bonus should expire as scheduled at the end of July, too.

“While the consumer economy is shuttered, Congress has a responsibility to make sure that Americans can bounce back in a matter of weeks or months. Otherwise, millions will struggle and be slow to recover from the economic crisis, and many might not make it if the Senate doesn’t move to help them now, now, now.”

“One last point, we are asking these people to stay home. We were asking them to help us defeat this virus by not working and to stay with their families. So one of the incentives here, if there is a good unemployment benefit coming in, is that they can keep their families together while they obey this directive, at least, from government, State and Federal.”

“The agreement increases the maximum unemployment benefit by $600 per week and ensures that laid-off workers, on average, will receive their full pay for 4 months…. It will also allow companies to furlough workers so that they can stay on as employees, so when, God willing, this crisis abates, they can quickly resume work with their employer and businesses can reassemble.”

Mr. DURBIN. “Senator, I am sure you are acutely aware that this is a 4-month program. We are not offering people this benefit indefinitely. I hope we don’t have to renew it…”

“And now I find that some of my Republican colleagues are very distressed. They are very upset that somebody who is making 10, 12 bucks an hour might end up with a paycheck for 4 months that is more than they received last week. Oh, my God, the universe is collapsing. Imagine that. Somebody who is making 12 bucks an hour now faces, like the rest of us, an unprecedented economic crisis and, with the 600 bucks on top of their regular unemployment check, might be making a few bucks more for 4 months. Oh, my word, will the universe survive?”

This article by Matt Weidinger first appeared in AEIdeas on June 17, 2020.