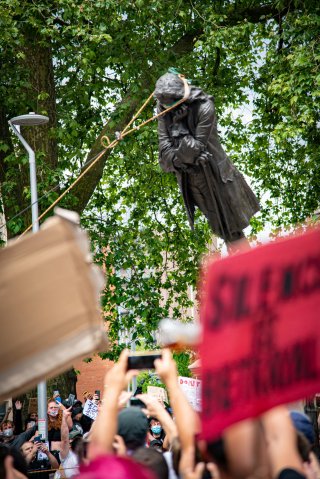 The throwing of a statue of the slave trader Edward Colston into the river in Bristol, UK, by anti-racist protesters has sparked divergent reactions. Bristol councillor Richard Eddy is publicly “outraged” by what he sees as “frenzied thug violence” while the mayor, Marvin Rees, called the statue an “affront” and said he felt “no sense of loss”. This division in opinion is reflected across the country.

Elsewhere, other controversial statues – such as that of Cecil Rhodes, who was involved in Victorian British imperialism in southern Africa – are in the spotlight, with thousands of people gathering in Oxford to demand that Oriel College, which Rhodes attended and to which he left a large financial bequest, take it down. The statue of Robert Milligan – a West India merchant and slaveholder – was removed on June 9 from outside the Museum of London Docklands and the mayor of London, Sadiq Khan, has announced a commission into London’s public landmarks.

These statues are just the start – Britain’s heritage is steeped in the remnants and history of slavery, but you wouldn’t necessarily know as it is rarely highlighted. Recent events may inspire change at other British heritage sites. On the other hand, they may become more hesitant than before.

I research if and how heritage sites in the UK discuss the “business of slavery”, against the long neglect of Britain’s role in transatlantic slavery and its racial legacy. For many white people this has long been invisible, untaught and unknown.

The recent wave of Black Lives Matter protests has reminded the world that people are suffering under anti-black racism. Racism, and structural white privilege, is rooted in historical white supremacy and imperialism. Anti-black racism is rooted in historical justifications for the enslavement of Africans across North, South and Central America and the Caribbean islands. Understanding this past helps deconstruct its racial legacy.

Yet for decades Britain has neglected, even celebrated, its own colonial history. Discussion of slavery itself has been subordinated beneath a focus on abolition, and particularly white abolitionists such as William Wilberforce. This occurs in both classrooms – where teaching transatlantic slavery is optional and limited – and at heritage sites, including statues and plaques, historic houses and museums.

It is estimated that approximately 12.5 million enslaved Africans were forcibly trafficked across the Atlantic between the 16th and 19th centuries. More than three million of those men, women and children were carried on British slaving ships. They were delivered to work on brutal plantations, where they cultivated crops such as sugar and cotton. During this period slavery was introduced to the lands that formed the USA, while they were British colonies.

Given this background, Colston and Milligan are far from exceptional. Britain had thousands of slave traders and plantation owners. The latter were compensated – billions in today’s money – when slavery was abolished in the British Caribbean in the 1830s. Related British government debt was not paid off until 2015, meaning that UK taxpayers alive today contributed to paying off that legacy.

As well as the slave traders and plantation owners, many people worked in industries that serviced the slave trade. These included shipbuilders and ropemakers, insurers and bankers, and manufacturers – whose guns were traded for enslaved people or whose tools were taken directly to plantations. Many more consumed products from the plantations, such as sugar or tobacco.

Others relied on products cultivated by enslaved labourers for their businesses, such as rum distilleries and cotton mills. Following British abolition, the mills continued to import raw cotton from plantations in the US South, where slavery was not abolished until 1865.

Despite the fact that much of the UK was built from the profits of the “business of slavery”, few British heritage sites deeply examine this history. Many do not even acknowledge it. The exceptions to this are the few exhibits and galleries dedicated to transatlantic slavery, which are found particularly in the former slave trading ports, such as at the Museum of London Docklands. The only museum wholly dedicated to the subject is the International Slavery Museum in Liverpool, Britain’s largest slave trading port.

For those who do not live in these cities it may feel like slavery has nothing to do with the UK. With the exception of modest exhibits at cotton mills – particularly Cromford Mills in Derbyshire and Quarry Bank Mill outside Manchester – that sense is created because slavery is largely absent from rural heritage sites.

The money and consumables from slavery spread across the country often leaving no physical trail. But some of that wealth was poured into sites such as Georgian squares and rural estates that remain today. Some of these are now heritage sites that have previously ignored or barely addressed their links to slavery. The National Trust has shown some willingness to do this by engaging with the Colonial Countryside Project, but there is more to do.

This is particularly true of houses that were built or later purchased and renovated using funds from slavery. And all of those containing mahogany doors, staircases and furniture, for example, who do not tell their visitors that mahogany was cut by enslaved labourers.

Newstead Abbey in Nottinghamshire is rare in having an installation, in the form of a film made by the local Slave Trade Legacies group, offering some acknowledgement of its link to slavery wealth. In this case, slavery is presented as a layer of history. Such interventions can be effective in reshaping narratives, but they are all too rare.

Such an intervention was attempted with Colston’s statue. Following campaigns since the 1990s, Bristol council was supposed to be adding a plaque, but the wording could not be agreed. While they stalled, the statue was torn down.

As the heritage sector reopens after the lockdown period, one cannot help but wonder how they will respond to the Black Lives Matter marches. Previously, critical and thorough examinations of Britain’s slavery past have been largely absent or underdeveloped outside of purpose-built slavery museums and exhibits. Hopefully, recent events will encourage them to engage with their own connections to Britain’s slavery history and the racial legacy that continues to impact the country.

This is a moment of potential consciousness and change. The heritage sector can choose to help the public understand what happened in the past and what continues to happen because of it – but sites may nervously hide from this. They will most likely do what they believe their visitors want. Their potential visitors are you.